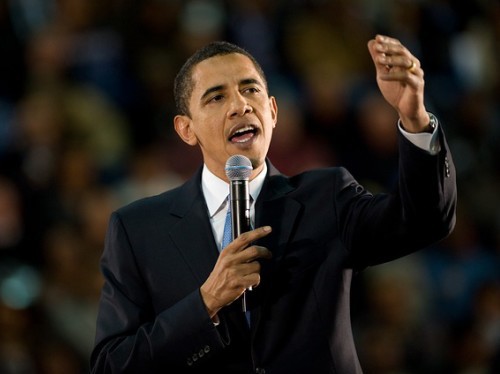 “At the current pace that we are on, the scale of tragedy that will consume humanity is something we have not seen in perhaps recorded history if we don’t do something about it,” he told a near-capacity crowd at Calgary’s Saddledome. “All of us are going to have to recognize that there are trade-offs involved with how we live, how our economy is structured, and the world that we’re going to be passing on to our kids and grandkids. Nobody is exempt from that conversation.”

“We have probably a 20-year window to at least get things going in a smarter direction,” he added at a second event hosted by the Greater Vancouver Board of Trade. The Globe and Mail says Obama “called for wealthy oil-producing countries, such as Canada and the United States, to more seriously look at transitioning into an energy mix that can reduce greenhouse gas effects, and more effectively using solar and wind energy as well as energy efficiency in the electrical grid.”

In Calgary, Obama “said fossil fuels have provided a cheap and plentiful source of energy since the Industrial Revolution. The remark drew a loud whistle and applause from the audience,” CTV News reports. “The crowd also clapped when Obama said there is indisputable science that the planet is getting warmer.”

Obama warned that sea level rise will displace populations, while insect-borne diseases are gaining ground in locations where they were previously rare or unknown. “He said the question becomes how to build recognition, not just generally, but in places such as Alberta, that newer energy sources need to be developed and older ones have to be cleaned up,” CTV notes, using the same engineering prowess that built the tar sands/oil sands.

“It is important for our politics to take into account all the jobs and the economy that is generated from energy,” he added in his Vancouver speech. But despite Canada’s “lip service” to implementing the Paris Agreement, he said jobs and exports have always been seen as a priority. Which means that, when it comes to climate action, “we put it off.”

Obama warned that the chaos wrought by climate change will make politics more toxic. “Imagine when you have not a few hundred thousand migrants who are escaping poverty or violence or disease, but you now have millions,” he said. “Imagine if you start seeing monsoon patterns in the Indian subcontinent changing so that half a billion people can’t grow food and are displaced.”

“If you think you have problems with migration or conflict or refugees or pandemic now, imagine if the entire global community is placed under the strain of these crazy weather patterns,” he added. And yet, “this is coming. I have two daughters. Within their lifetime, they will see these events.”