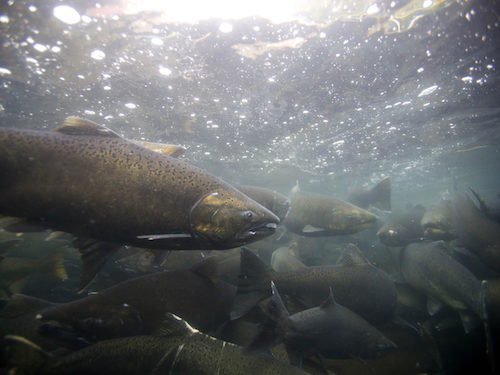 Ocean warming has delivered a significant decline in sustainable fish catches over the last century, but holding average global warming to 1.5°C would help protect future catches worth billions of dollars per year, according to two new studies.

“These aren’t hypothetical changes sometime in the future,” said Rutgers University’s Malin Pinsky, a co-author of the first of the two studies, which appeared last week in the journal Science. “We were stunned to find that fisheries around the world have already responded to ocean warming,” with a 4.1% decline in 124 species that represent about one-third of the global catch between 1930 and 2010.

“So much of the global population depends on fish as a source of protein and employment, and some of the regions where that is most true are the regions that have been most affected by ocean warming,” added lead author Christopher Free of the University of California, Santa Barbara.

“I think the results are really important as a call to action to account for impacts of climate change in assessing the status of fish populations and setting the catch limits and regulations that dictate how we manage those populations.”

While some fisheries off eastern Canada and the northeastern United States and in the Baltic Sea saw increases in productivity, regions like the Sea of Japan and the North Sea were hit far harder than the average, with declines in the range of 15 to 35%, InsideClimate News reports. Free said the combination of overfishing and warming creates a “one-two punch”, with overfishing reducing reproduction rates and damaging habitats while warming makes the already-weakened species more vulnerable to collapse.

Meanwhile, a separate paper in the journal Science Advances concluded that the annual fish catches that could be sustained in a 1.5°C global warming scenario would be 9.5 million tonnes larger than if average global warming hit 3.5°C—and 90% of the benefit would occur in developing countries, InsideClimate states.

“That is huge,” said lead author Rashid Sumaila, director of the Fisheries Economics Research Unit at the University of British Columbia’s Institute for the Oceans and Fisheries. “They don’t pump CO2 per capita nearly as much as we do in the North, they depend on fish more, and they will be impacted more” by climate change.

But fisheries in tropical regions may be difficult to save as the atmosphere and the oceans warm. “There, already warm water temperatures will continue to increase in coming decades due to climate change, even if emissions targets laid out in the Paris Agreement are met,” InsideClimate warns. “South Pacific island nations that collect royalties from leasing the right to catch fish in their waters will be especially hard hit.”

“That is what supports almost everything, all of their social safety nets and infrastructure and schools and things. You lose that and the whole society suffers,” said Merrick Burden, a senior economist with the Environmental Defense Fund’s Fishery Solutions Center. “There is an immense human toll that is associated with climate change. We don’t see that now, but it’s coming and it’s going to really affect millions of people in very undesirable and consequential ways.”