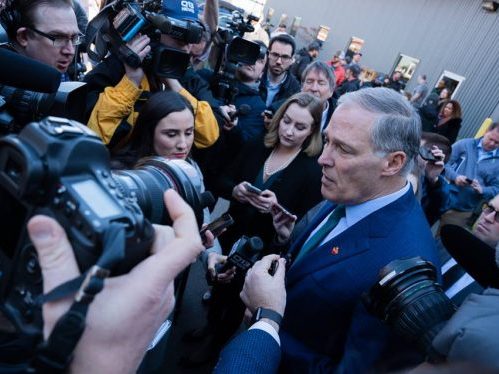 When Washington Governor Jay Inslee announced his candidacy for the 2020 Democratic presidential nomination last Friday, he became the first major presidential candidate in U.S. history to put climate change at the centre of their campaign.

“This is our moment, our climate, our mission—together, we can defeat climate change,” he tweeted. “That’s why I’m running for president.”

“This is the 11th hour, but it is Washington [State]’s hour to shine,” he said in his State of the State speech earlier this year. “It’s a time of great peril, but also great promise.”

ThinkProgress says Inslee’s central focus on climate is “unprecedented” in U.S. presidential campaigning. “And it shows how far the conversation on this policy issue has shifted. During the 2016 campaign, for instance, not a single question about climate change came up during the presidential debates.”

But “over the past two years, the effects of climate change have become more visible to the public, as people across the country have suffered devastating hurricanes and wildfires.” The pressure began to build after mid-term elections in November, culminating so far in the Green New Deal resolution introduced last month by Rep Alexandria Ocasio-Cortez (D-NY) and Sen. Ed Markey (D-MA).

ThinkProgress notes that a half-dozen other Democratic candidates are mentioning climate change in their initial campaign platforms. “Beyond voicing support for climate action, however, it’s unclear how the different presidential candidates specifically plan to tackle climate change on a policy level—a question they’ll need to address as their campaigns progress.”