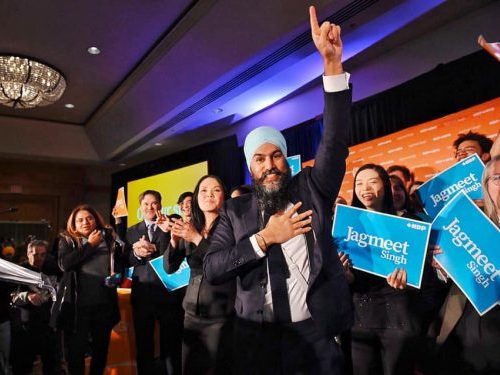 With a large share of Canadian voters anxious for more government action on climate change, an adapted version of the Green New Deal might be the New Democratic Party’s best hope of recovering voter support in time for this year’s federal election, 350.org organizer Cameron Fenton argues in a post for National Observer.

“It’s no secret that, in 2015, [Prime Minister] Justin Trudeau’s success was due, in large measure, to his ability to outflank the NDP on critical progressive issues—including climate change,” Fenton notes. “It’s also true that his majority victory was driven by a dramatic uptick in youth voter turnout—57.1% of eligible 18- to 24-year-olds voted in 2015, compared to 38.8% in 2011—that largely showed up for the Liberals.”

Which makes the Green New Deal, introduced as a congressional resolution last month by Rep. Alexandria Ocasio-Cortez (D-NY) and Sen. Ed Markey (D-MA), a possible template for a Canadian progressive party looking for its next big thing.

“The Green New Deal isn’t just a good idea,” Fenton writes. “With the campaign and organizing savvy of the Sunrise Movement behind it, polling numbers show wide geographic and cross-partisan support (especially among youth). It’s become a winning platform for Democrats and, if they imported it in the right way, it could do the same for [party leader] Jagmeet Singh and the NDP.”

Fenton cites the results of multiple opinion polls that show Canadians’ wide understanding that climate change is real and caused by human activity, their support for more ambitious government action, including a carbon tax, and fossil workers’ strong majority support for a “time-bound transition” to 100% renewable energy. He adds that “nearly 25% of Canadians think no federal party leader has the best plan to deal with climate change, and only 5% think Jagmeet Singh’s plan measures up.”

All of which should make it a winner for the NDP to adopt and endorse a policy plank that, in its U.S. version, “would create jobs and support working families through a federal jobs guarantee program,” he writes. There’s already speculation that Singh, fresh from last week’s byelection win in Burnaby South, will face pressure to strengthen his party’s position on climate, with some of that push coming from former MP Svend Robinson, pulled back into electoral politics after a 15-year absence by the IPCC’s October, 2018 report on 1.5°C pathways.

“Grassroots activists within the NDP are trying to make sure that Robinson is not alone,” Fenton states. “Across the country, nomination races are being challenged by young women with bold, ambitious, Green New Deal-esque platforms.”

That matters as much for the party as it does for the country, he suggests. “With only eight months until the next federal election, it’s going to take a small miracle for the NDP to right their ship. But, if they want a shot at clawing their way back to federal relevance, they need to call a big shot, and a Green New Deal for Canada is their best chance to do that.”