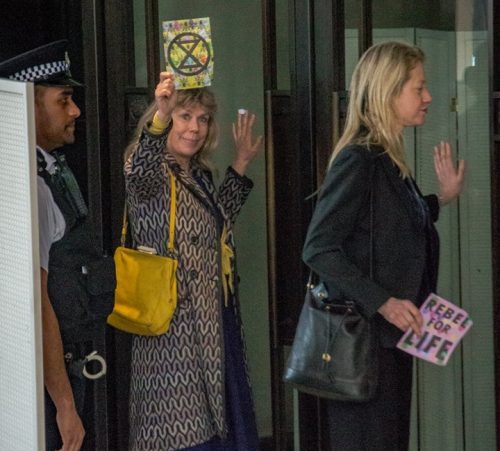 The fossil industry’s challenges amount to a massive image problem that has analysts predicting its decline and fall in the absence of facts, Saudi Aramco CEO Amin Nasser told a major fossil industry event last week.

“Our industry faces a crisis of perception with multiple stakeholders,” Nasser said. “Important stakeholders believe that the entire world will soon run on anything but oil.”

While claiming that “these views are not based on logic and facts, and are formed mostly in response to pressure and hype,” he added that “our traditional qualities of ample, reliable, and affordable supply are not enough to meet society’s expectations today.”

While Nasser’s assertions might have been convincing enough for an audience of his executive peers, Bloomberg reports that “uncomfortable truths began to intrude upon the usual round of business meetings and cocktail parties” from the very beginning of the big International Petroleum Week conference in London.

“Three climate change protesters who glued their hands to the doors of the conference venue found that nature was making their point for them,” the news agency recounts. “’Why is it so warm?’ one shouted to people walking in off streets that were basking in a record winter heat wave, which was causing wildfires in the north of the country” in late February.

The protest last Wednesday “highlighted the oil industry’s existential crisis,” Bloomberg adds. “It is under increasing pressure to course correct and align itself to the demands of the energy transition. While Big Oil is no stranger to demonstrations at conferences, CEOs are finally acknowledging they face real consequences to their ability to retain shareholders if they don’t respond.”

But “even acknowledging the problem has been an excruciating process,” and while some colossal fossils are making tentative moves in the right direction, “the companies’ primary business is oil, which helps sustain profits and makes them some of the biggest dividend payers in the world. Their clean energy investments make up only a small portion of the tens of billions of dollars they spend on finding and producing crude oil.”

The Bloomberg story includes a chart that shows “new energy” at 6% of Equinor’s capital investment, 5% of Shell’s, 4% of Eni’s, and 3% of Total’s and BP’s.

At IP Week, meanwhile, “voices of the demonstrators outside London’s InterContinental Hotel could be heard by IP Week delegates who had paid £2,000 each to attend,” Bloomberg notes. Extinction Rebellion member Roman Paluch said not a single participant stepped out of the hospital to talk to protesters—and hotel staff put up white screens to cover the three who’d attached themselves to the building.

“People in there are kind of um’ing and ah’ing because they can’t figure out whether this is going to affect them or not. Meanwhile, it’s happening all around them,” said Extinction Rebellion member William Skeaping. “It’s just tragic.”