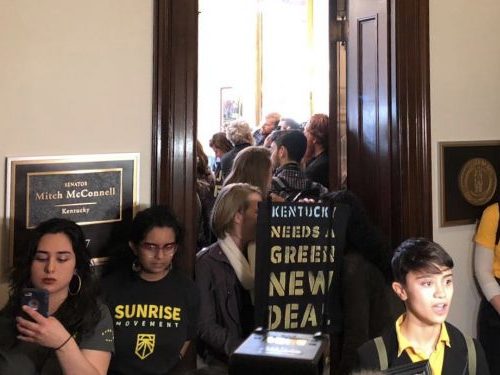 Hundreds of youth activists descended on the office of Senate majority leader Mitch McConnell (R-KY) Monday, demanding to talk to him about the Green New Deal resolution.

The protesters “filled the Republican leader’s office and the hallway outside, with constituents from his home state of Kentucky telling stories about poverty and their fears of the human cost of climate change,” The Guardian reports. Organizers with the Sunrise Movement said 42 of the participants were arrested.

A member of McConnell’s staff “greeted the group and took down contact information,” the paper adds. “As with all Kentuckians visiting DC, we welcomed them to the office today,” said spokesperson Robert Stuerer. “He has not answered a damn voicemail,” retorted Kentucky protester Jenny Bencomo-Suarez.

Stuerer noted that his boss had already laid plans to bring the Green New Deal up for a Senate vote, a move the protesters condemned as a “shameful ploy” aimed at hamstringing centrist Democrats.

The group accused McConnell of of fighting any action to forestall climate change. “He has consistently denied access to us—access to resources, access to jobs, living wages, health care, and the right to sustain ourselves in a livable, breathable future,” Bencomo-Suarez said.

“You line your pockets while we die in floods and choke on the air we breathe, yet you don’t even have the decency to look us in the eyes,” added Destine Rigby, 17, of Louisville, KY.