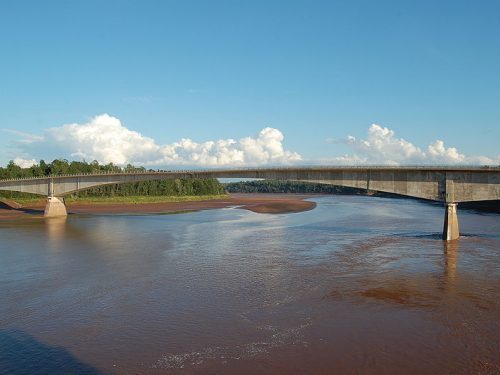 Mi’kmaq protesting a controversial project to transform underground salt caverns near Halifax into natural gas storage tanks say a recent court injunction forbidding further protests at the project site, purportedly in the name of public safety, is nothing more than a deliberate act of corporate intimidation.

The company behind the plan, Alton Natural Gas LP, “has filed an application requesting safe access to its Alton River facilities near Shubenacadie, and is seeking to remove ‘trespassing’ protesters who have ‘consistently’ blocked access to the site,” reports The Canadian Press.

Such access is needed, and immediately, says the subsidiary of Canadian natural gas company AltaGas, to repair electrical equipment at the project site it claims was damaged during recent flooding.

Water protectors have been at the site since 2014, determined to block a project which would involve pumping water into the caverns to flush out the salt, then washing the resultant brine back out into the Shubenacadie River. They’re deeply suspicious of the company’s claims.

“I think they’re trying to use this injunction to give power to the RCMP to force us off this land. But we have our own intrinsic rights. We have a sacred duty,” said water protector Dorene Bernard, a member of the Sipekne’katik First Nation

Not so, says Alton, insisting that the repair work is necessary “to ensure the safety of its workers, neighbours, and those who may attempt to enter without authorization,” reports CP.

In a news release issued shortly after the injunction was served, the company insisted that “while we respect the right of individuals to express their views safely and peacefully, trespassing at Alton has been an ongoing concern for some time”. It adds that the injunction came in the wake of failed efforts to engage protesters at the site.

Bernard agrees there has indeed been a kind of trespassing going on—by Alton itself—telling CP that protesters “spotted company officials walking into the site in December, and again a few weeks ago.”

“We didn’t block anybody. They walked in and walked out,” she said. “There was no altercation. There were no threats. If anybody was threatening, it was them.”

The recent injunction projects a similar sense of aggressive entitlement, Bernard told CP. “They think they can go ahead and do whatever they want to do, regardless of our Mi’kmaq people being consulted and the impact on our treaty rights and our land and water.”

The Supreme Court of Nova Scotia will hear the case March 12.