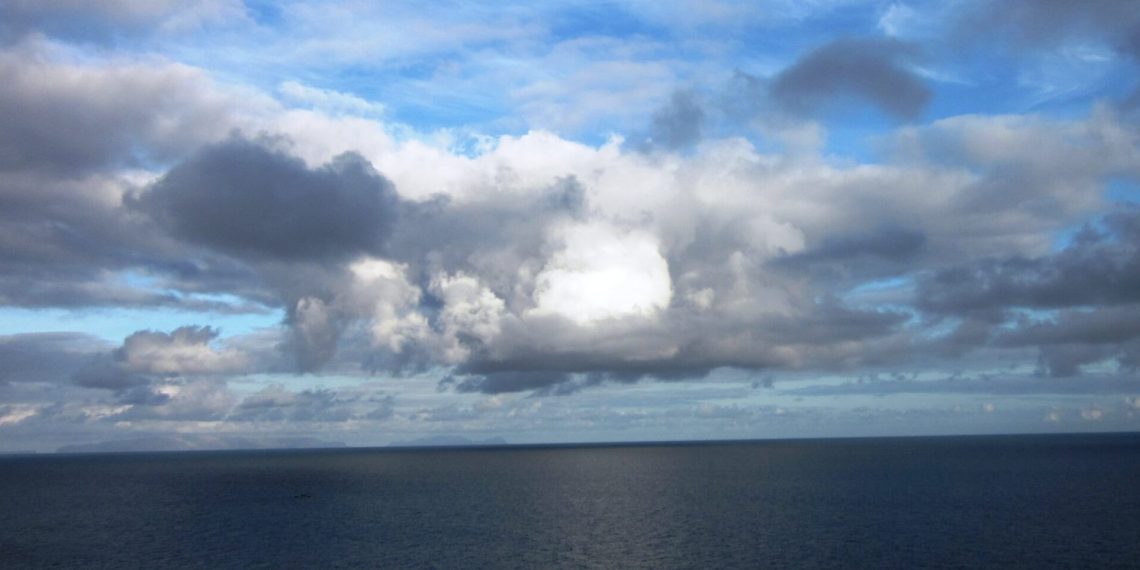 Stratocumulus clouds over the Atlantic: A tipping point ahead? Image: By MAClarke21

The planet’s temperature could zoom in an ever more greenhouse world, as researchers identify a dangerous possible cloud tipping point.

LONDON, 27 February, 2019 − Climate scientists have confirmed a high-level hazard, a cloud tipping point, that could send global warming into a dramatic upwards spiral.

If carbon dioxide concentrations in the atmosphere become high enough, the clouds that shade and cool some of the tropical and subtropical oceans could become unstable and disperse. More radiation would slam into the ocean and the coasts, and surface temperatures could soar as high as 8°C above the levels for most of human history.

And this dramatic spike would be independent of any warming directly linked to the steady rise in carbon dioxide concentrations themselves, the scientists warn.

In Paris in 2015, a total of 195 nations vowed to take steps to contain global warming to “well below” a maximum of 2°C above the average before the start of the Industrial Revolution, powered by the exploitation of fossil fuels.

In the last 200 years, levels of the greenhouse gas carbon dioxide in the atmosphere have increased from 288 parts per million to around 410 ppm and the average global temperature has already increased by about 1°C.

Researchers have repeatedly warned that the Paris promises have yet to be turned into coherent and consistent action, and that if the world goes on burning coal, oil and natural gas on a “business as usual” scenario, catastrophic consequences could follow.

Now US researchers warn in the journal Nature Geoscience that they know a bit more about the climate mechanisms by which global warming could accelerate.

If carbon dioxide ratios climb to 1,200 ppm – and without drastic action this could happen in the next century – then the Earth could reach a tipping point, and the marine stratus clouds that shade one-fifth of the low-latitude oceans and reflect between 30% and 60% of shortwave radiation back into space could break up and scatter.

The sunlight they normally block would slam into the deep blue sea, to warm the planet even faster.

“I think and hope that technological changes will slow carbon emissions so that we do not actually reach such high CO2 concentrations,” said Tapio Schneider, an environmental scientist at the Jet Propulsion Laboratory, the research centre managed for the US space agency NASA by the California Institute of Technology.

“But our results show that there are dangerous climate change thresholds that we have been unaware of.”

The role of clouds in the intricate interplay of sunlight, forests, oceans, rocks and atmosphere that controls the planet’s climate has been the subject of argument. Do clouds really slow warming? And if so, by how much, and under what conditions?

There may not be a simple answer, although researchers are fairly confident that the thinning of clouds over the California coasts may have made calamitous wildfires in the state more probable.

So to resolve what Professor Schneider calls “a blind spot” in climate modelling, he and his colleagues worked on a small-scale computer simulation of one representative section of the atmosphere above the subtropical ocean, and then used supercomputers to model the clouds and their turbulent movement over a mathematical representation of the sea. And then they started to tune up the atmospheric concentrations of carbon dioxide.

They found that, once CO2 levels reached 1,200 ppm, the decks of stratocumulus cloud vanished, and did not reappear until CO2 levels dropped to well below this dangerous threshold.

If – and this has yet to happen – other researchers use different approaches to confirm the result, then the US scientists will have established a better understanding of one component of natural climate control.

The research may also illuminate a puzzle of climate history: 50 million or more years ago, during a geological epoch called the Eocene, the Arctic ice cap melted. Climate models have shown that, for this to happen, atmospheric carbon ratios would need to rise to 4,000 ppm.

These, the Caltech team, suggests, would be “implausibly high” CO2 levels. The latest study suggests this might be an overestimate: a mere 1,200 ppm would be enough to set the planetary thermometer soaring. − Climate News Network

Young forests use carbon most effectively