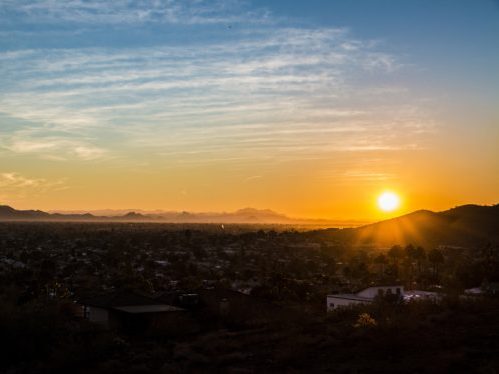 With property values plummeting across south Florida as prospective buyers prepare for the reality of rising sea levels, Arizona real estate will be next to feel the savage bite of climate change as researchers forecast that rising temperatures will leave the Grand Canyon State feeling like Kuwait at its most humid.

Studies confirm billions already lost to rising seas and storm surge in Florida, with projected “tens of billions” more in losses to come, prior to the market collapsing completely “in the coming decades,” reports CleanTechnica.

And data collected by Climate Central points to Arizona as the next U.S. state at risk, though “it won’t be too much water, but too little in great part” that causes a catastrophic implosion in the real estate market before 2050.

Among the “state-by-state breakdowns, comparisons, and visualizations” deployed by Climate Central in its efforts to galvanize policy-makers to climate action, CleanTechnica notes, one graphic shows summers in Arizona in 2100 (103.98°F/40°C) comparable to Kuwait City today (114.08°F/46°C) once humidity is factored in.

“Arizona has already been significantly impacted by global warming, with an increase in average summer temperatures of 1.8°F since the 1970s,” the tech daily notes, and a projected increase in so-called “danger days, when the combination of heat and humidity makes it literally dangerous to be outside for any period of time, and makes outdoor work non-viable” will soon find the state’s property values withering on the vine.

Climate Central foresees Tucson experiencing 135 danger days per year by 2050. And even now, “as a harbinger of these changes, [the city] now has 24 more days above 100°F/38°C on average per year than in the 1970s, the second-largest increase in the nation,” CleanTechnica notes.

The other key issue is drinking water. “Unlike Miami, whose water supply is at risk for different reasons, Arizona can’t spend 2.5 times the money per cubic yard of water and desalinate seawater. There just isn’t any viable source of water for Arizona to desalinate.”

Arizona property values could begin to decline as early as 2030, the article notes, and because “in general real estate is a 10-year horizon acquisition,” prices may begin to drop well in advance of projected declines.