Another Century of Fossil Use Could Eliminate Cloud Cover, Trigger 8.0°C of Additional Warming 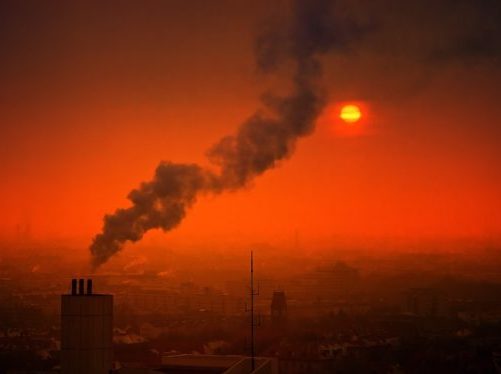 A startling new study in the journal Nature Geoscience concludes that another century of burning fossil fuels at today’s levels could trigger the total loss of the world’s stratocumulus clouds and trigger another 8.0°C/14.0°F of global warming.

“Clouds currently cover about two-thirds of the planet at any moment,” writes science journalist Natalie Wolchover in Quanta Magazine. But a supercomputer simulation by researchers at the California Institute of Technology “revealed a tipping point: a level of warming at which stratocumulus clouds break up altogether. The disappearance occurs when the concentration of CO2 in the simulated atmosphere reaches 1,200 parts per million [ppm]—a level that fossil fuel burning could push us past in about a century, under ‘business-as-usual’ emissions scenarios.”

She adds: “To imagine 12 degrees of warming, think of crocodiles swimming in the Arctic and of the scorched, mostly lifeless equatorial regions during the [Paleocene-Eocene Thermal Maximum or PETM].”

“The point is not that this scary scenario is going to happen,” concluded Washington Post climate specialist Chris Mooney in a series of tweets. “Given the current trajectory of climate policy and renewables, it seems unlikely. Rather, the key point—and it’s a big deal—is that there are many things we don’t understand about the climate system and there could be key triggers out there, which set off processes that you can’t easily stop.”

“The really terrifying aspect of this research is the reminder that we do not yet know all the ways catastrophic outcomes can emerge from this uncontrolled experiment on our only habitat,” agreed Thomas Levenson, a professor of science writing at the Massachusetts Institute of Technology.

Wolchover’s feature post on Quanta Magazine details a “brief, cataclysmic hot spell 56 million years ago” that holds clues to the Earth’s future if greenhouse gas emissions aren’t brought rapidly under control. In the words of one of the researchers she cites, “Earth was triggered, and all hell broke loose.”

“After heat-trapping carbon leaked into the sky from an unknown source, the planet, which was already several degrees Celsius hotter than it is today, gained an additional six degrees,” Wolchover adds. “The ocean turned jacuzzi-hot near the equator and experienced mass extinctions worldwide. On land, primitive monkeys, horses, and other early mammals marched northward, following vegetation to higher latitudes. The mammals also miniaturized over generations, as leaves became less nutritious in the carbonaceous air. Violent storms ravaged the planet; the geologic record indicates flash floods and protracted droughts.”

Citing multiple climate scientists, her article drives home two conclusions: that ancient periods of warming “were always far more extreme than theoretical models of the climate suggest they should have been,” and cloud cover appears to be the hitherto “unknown factor that has an outsize influence on Earth’s climate.”

Wolchover stresses that “there’s a long way to go before we reach 1,200 parts per million, or thereabouts. Ultimate disaster can be averted if net carbon emissions can be reduced to zero—which doesn’t mean humans can’t release any carbon into the sky. We currently pump out 10 billion tons of it each year, and scientists estimate that Earth can absorb about 2 billion tons of it a year, in addition to what’s naturally emitted and absorbed.” So at that level of emissions, “anthropogenic global warming will slow to a halt.”

But that doesn’t make the risk of business-as-usual emissions—exemplified in some fossils’ delusional projections for future demand growth—any less alarming.

While “mammals, newly ascendant after the dinosaurs’ downfall, actually thrived” during the PETM, she writes, “their story is hardly one we can hope to emulate. One difference, scientists say, is that Earth was much warmer then to begin with, so there were no ice caps to melt and accelerate the warming and sea level rise.”

“The other big difference,” NASA Goddard Institute Director Gavin Schmidt told Wolchover, “is, we’re here, and we’re adapted to the climate we have. We built our cities all the way around the coasts; we’ve built our agricultural systems expecting the rain to be where it is and the dry areas to be where they are.” And national borders are where they are. “We’re not prepared for those things to shift,” he said.