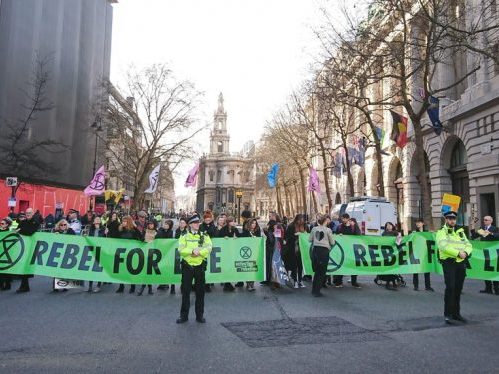 “The fashion industry’s influence permeates deep within culture and radiates globally,” the letter stated. “It is a powerful engine of culture and could be a revolutionary force for change”.

But one protester said the industry is only interested in sustainability when “it’s fashionable”, adding that “they hide behind the culture and the art.”

On Sunday, about 100 people blocked traffic for seven minutes at a time, then allowed vehicles to pass for three-minute intervals. “Activists handed out leaflets to the public and encouraged cars to turn off their engines while stopped,” DeSmog UK reports. “Some onlookers were not clear why the group was protesting and were overheard questioning why they ‘needed to be here’.”

The British House of Commons began looking into the sustainability of the fashion industry, including the environmental impact of “fast fashion”, last June, DeSmog UK states. “According to the UNFCCC, the production of textiles adds 1.2 billion tonnes of carbon dioxide equivalent annually—more than those of international flights and maritime shipping combined,” the publication adds.