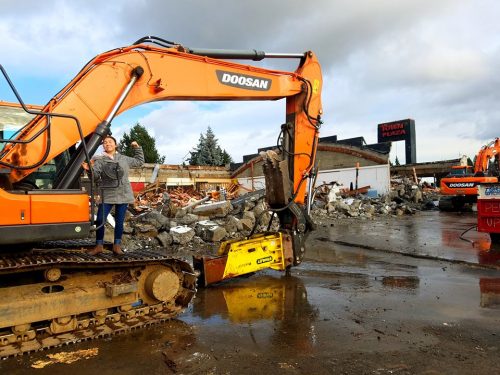 Affordable, green, and employing immigrant Americans, a new housing project in a low-income neighborhood in Portland, Oregon is being cast as an early glimpse of all that a Green New Deal could bring.

One of the city’s most culturally rich neighbourhoods, Cully is also one of its poorest. And that makes it the unfortunate host to un-neighbourly businesses like the car salvage lot which “caught fire and spewed toxic chemicals into the air last year,” Grist reports.

But Cully is fighting back against grime and crime of all kinds, with the community-driven construction of a new affordable housing complex taking shape on the former site of a local strip club.

“On the surface,” the complex “will be much like any other development designed to help respond to the national housing crisis,” Grist writes. But digging a little deeper, it “has the potential to become a model for much more—a solution not only to the displacement of longtime residents, but to the lack of green investment in the low-income communities of colour that are already on the front lines of the looming climate change crisis.”

The complex of 140 residential units and commercial space—to be named Las Adelitas after the women who fought in the Mexican Revolution—may well become a model for others to follow once it’s complete in 2020. That result owes strongly to the coalition of four non-profits, collectively known as Living Cully, which has had almost 10 years to prove its commitment to the truly inclusive sustainability that the proponents of the Green New Deal are now beginning to articulate.

The lead organizer, the non-profit builder Verde, started out as a landscaping business in 2005, purpose-built to train and employ local residents to provide sustainable landscaping for the affordable housing developments being built by Hacienda CDC, a Latino community development corporation that became the second member of Living Cully and owner of Las Adelitas. Habitat for Humanity and the Native American Youth and Family Center are the other members.

And Verde has proven a good employer, reports Grist: “Wages start at US$13.50 an hour and increase to $18.50 by the third year of employment, with paid training sessions and certification provided, as well as medical and dental benefits.”

It’s a good educator, as well. Executive Director Tony DeFalco said the non-profit “has trained over 200 area residents in jobs like storm water management and habitat restoration.” The company also provides English classes for its employees.

In an age where green investments generally drive the price of housing upwards, Grist writes, “Living Cully’s motto can seem counterintuitive at first: ‘Sustainability as an anti-poverty strategy.’” And that’s “certainly a challenge in Cully, where, despite anti-displacement efforts, housing prices are in fact rising.” But DeFalco believes Verde’s recipe for avoiding “green gentrification” will lie in “pairing housing projects [as opposed to houses] with environmental investments.”

Living Cully is also working to preserve existing low-income housing, through initiatives like a mobile home weatherization program that “aims to lower bills of low-income residents who pay a disproportionate amount of their paycheques to utilities,” Grist notes. Which means that, “as Congress continues to figure out what a Green New Deal might look like on a national scale, Cully could become a valuable and tangible model community to turn to for inspiration.”

DeFalco agrees. “We are at a place now, where—as a nation—we can no longer make an environmental investment without social and environmental justice outcomes,” he said. “What we’ve been able to do here at a smaller scale is basically to demonstrate how you do that.”