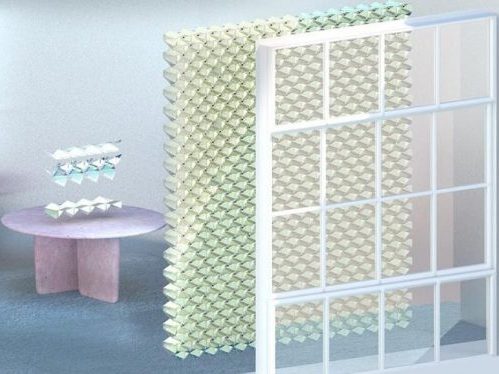 An Australian architectural design firm is working on a new origami-style window blind that produces electricity and even brings more natural daylighting into the space.

Solgami is ideal for apartment-dwellers who don’t own their homes, and have no say in whether solar panels are installed on their roof, Fast Company reports.

“We’re looking at repositioning the city as a place of production, not just a place of consumption,” said Ben Berwick, an architect with the design firm Prevalent, who’s working on a prototype with a manufacturer in Japan.

“It’s a bit of a reconnection to the natural setting,” he added. “It’s making your apartment a better place to be.”

Berwick contrasted the idea with solar coatings for window glass that have tended to be inefficient and made living space darker. “Largely, it’s reducing the quality of your light,” he said. “Why would you put something in your window that’s going to cut your light by 50%, just to gain a small amount of electricity?”

The blinds will be shaped like louvers that are often used to reflect natural light into office buildings, Fast Company states. “While a typical solar panel on a rooftop reflects most of the light that hits it back into the sky, Solgami’s shape makes it possible to bounce light between multiple solar panels, generating more power,” the online magazine notes. “

The folded shape also provides more surface area,” which “makes it possible to harvest more energy from a window. As someone adjusts the blinds, that redirects the light reflected inside and changes the amount of electricity generated.”

While the origami shape is tricky to design at the prototype stage, it’ll be “relatively simple to manufacture at scale” by screen printing thin-film solar cells onto a plastic backing, cutting out the design, then folding it into its final shape. Fast Company says the output from the units will depend on the size and orientation of the windows, among other factors, but while those details are still taking shape, Prevalent claims the blinds will supply all the electricity required to run a glass-walled office building.

“This is basically a geometry to allow that to happen, considering the majority of the world’s population live in apartments or in urban areas,” Berwick said.