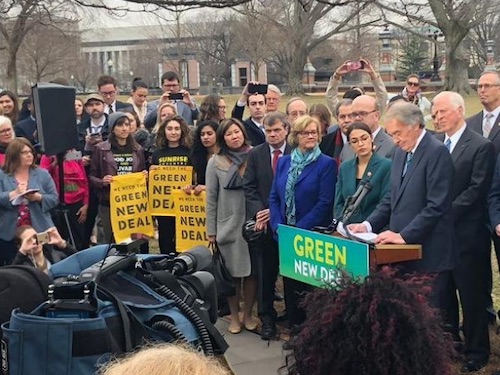 “This is really about providing justice for communities and just transitions for communities,” Ocasio-Cortez told National Public Radio yesterday morning. “So really, the heart of the Green New Deal is about social justice.”

At the news conference to unveil the deal, she added that “there is no justice and there is no combating climate change without addressing what has happened to Indigenous communities. That means that there is no fixing our economy without addressing the racial wealth gap. That means that we are not going to transition to renewable energies without also transitioning front-line communities and coal communities into economic opportunity, as well. That is what this is about: It is comprehensive, it is thoughtful, it is compassionate, and it is extremely economically strategic.”

“The sun is setting on the dirty energy of the past,” Markey tweeted following the release. “Today marks the dawn of a new era of climate action. When we look back on today, this will be the moment we will be able to say that the political tide has turned on the rising seas.”

“This is what hope feels like,” tweeted the Sunrise Movement, the U.S. youth mobilization behind the deal. “Climate change is a national emergency and we need a #GreenNewDeal to stop it.”

The plan lays out a “national mobilization” to build “resiliency against climate change-related disasters” and “achieve 100% of the power demand in the United States through clean, renewable, and zero-emission energy sources”, Common Dreams notes.

“The resolution is clear: We need to move to renewable energy as fast as possible,” said Sunrise Movement co-founder Stephen O’Hanlon. And “if we’re moving to 100% clean and renewable energy in 10 years, there won’t be the incentive to build new coal or fossil fuel infrastructure.”

The Washington Post says the resolution has the support of nine senators and 60 members of the House of Representatives, including at least four candidates for the Democratic presidential nomination—Sens. Cory Booker (NJ), Kirsten Gillibrand (NY), Kamala Harris (CA), and Elizabeth Warren (MA)—who will all co-sponsor it. Independent Sen. Bernie Sanders (VT), who’s considering a repeat run for the nomination, also supports it. House Speaker Nancy Pelosi (CA) gave the plan “measured, careful praise”, Vox states: “Frankly, I haven’t seen it, but I do know it’s enthusiastic, and I welcome all the enthusiasm,” she told media.

The plan “stipulates that any infrastructure deal struck with [Donald Trump] and other Republicans must address climate change, such as by building resilience to extreme weather events,” the Post adds. “It gives progressives something many of them have been itching for: The promise of a guaranteed high-paying job for every American,” backed in part by new trade rules designed to “stop the transfer of jobs and pollution overseas”.

It also envisions investments in zero-emission vehicles, high-speed rail, and other public transit, aimed at remaking the country’s transportation sector “as much as is technologically possible”.

Several statements supporting the plan compared the scope of the Green New Deal to the way an earlier generation responded to what it saw as its own existential challenge.

“This resolution outlines a plan to launch a WWII-scale transformation of our economy, including a just transition for workers and front-line communities,” the Sunrise Movement stated.

“We have something very ambitious in mind, something akin to what we undertook in the Second World War,” said Cornell University law and public affairs professor Robert Hockett. “It gives us a document around which to galvanize planning and action, and gives political figures running for office something they can sign onto or repudiate. There won’t be room anymore for just supporting ‘the concept.’”

Ocasio-Cortez declared the U.S. would fund the Green New Deal “the same way we paid for the original New Deal, World War II, the bank bailouts, tax cuts for the rich, and decades of war—with public money appropriated by Congress.” John Shimkus (R-IL), ranking Republican on the House Energy and Commerce subcommittee dealing with climate change, responded that “wealth transfer schemes suggested in the radical policies like the Green New Deal may not be the best path to community prosperity.”

As expected, the resolution leaves out references to an outright ban on fossil fuels, nor does it explicitly exclude low-emitting electricity sources like nuclear and large hydro. Analysts cast those choices as a necessity to maintain the broad coalition behind the Green New Deal, but not everyone was entirely satisfied.

“There’s some bold and visionary pieces in the Green New Deal resolution,” said Friends of the Earth U.S. President Erich Pica. “But the failure to mention and explicitly state that we have to end the era of fossil fuels is just a huge missed opportunity to be real about where we are and where we need to go.”

David Turnbull, strategic communications director at Oil Change USA, applauded the “bold and important proposals” in the deal but noted the words “fossil fuels” were absent from the text. “Today’s resolutions mark the start of a new conversation on climate action in the United States that can finally begin,” he said, “and we look forward to engaging fully to ensure a managed decline of fossil fuel production is a key part of that discussion.”

“We urgently need a bold and ambitious Green New Deal that tackles fossil fuels head-on,” agreed Food and Water Watch Executive Director Wenonah Hauter. “We support the ambition and scale of this resolution, and we are heartened by its recognition that climate change poses a grave threat to healthy food and clean water, but any legislation that does not explicitly address the urgent need to keep fossil fuels in the ground is insufficient.”

350.org co-founder Bill McKibben acknowledged that there is still “much work to be done,” but urged supporters to ” celebrate the fact that—thanks to the Sunrise Movement, AOC, Sen. Markey, and many others—there’s now climate legislation in Congress that actually addresses our greatest crisis at its actual scale.”

Justice Democrats Executive Director Alexandra Rojas called the plan “an earthquake in the Democratic Party”, adding that “any Democrat running for president who wants to be taken seriously on climate and economic policy needs to back Ocasio-Cortez’s Green New Deal resolution”.

This is what we need now.