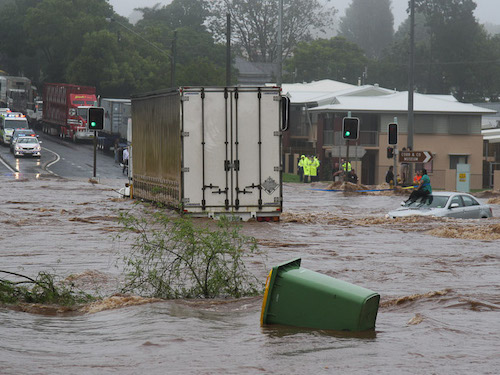 Hundreds of people in northern Australia were forced to evacuate their homes and about 18,000 lost power after the coastal city of Townville, in Queensland, received nearly four feet (120 centimetres) of rain between January 26 and February 4.

The torrential rains came after weeks of bushfires and searing heat across the country, the New York Times reports.

And as of Monday, the Queensland Bureau of Meteorology was warning of further flooding ahead. “There’s more water coming. We’re probably at a halfway point,” Townsville Police Chief Steve Munro said Sunday. “We’re not through this yet. There’s still a way to go.”

“It’s a wet part of Australia, we know, but the past week has delivered almost Townsville’s entire annual average of 1157.9 millimetres at a site where the data goes back to 1940,” the Brisbane Times agrees. “In other words, a year’s rain in a week for the town.”

Both the Brisbane and New York Times said the floods exceeded the “night of Noah”, an event in January 1998 that dropped 54.88 centimetres of rain on the area.

“Residents have been spotted kayaking down veritable rivers where pavement used to be,” the Washington Post reports. “Others caught off guard by the incessant downpour had to flee to their rooftops for immediate safety. Throughout the region, whole blocks of houses are half-submerged in murky water,” and residents are also being warned to watch out for crocodiles and snakes in “unexpected places”.

“Crocodiles prefer calmer waters and they may move around in search of a quiet place to wait for floodwaters to recede,” said Queensland Environment Minister Leeanne Enoch  in a prepared statement. “Crocodiles may be seen crossing roads, and when flooding recedes, crocodiles can turn up in unusual places such as farm dams or waterholes where they have not been seen before.”

Enoch also reminded residents that snakes are “very good swimmers”, and Queensland police urged people to stay out of the water.

“If the thought of coming face to face with a crocodile isn’t deterrent enough, before you start playing in floodwaters you should always remember the distinct possibility you could be wading in your neighbour’s feces,” the force tweeted Sunday. “Yes. Their feces.”

The rains forced officials to open the floodgates at the nearby Ross River Dam, which had hit nearly 250% of its capacity, and instruct residents to move to higher ground and save water.

“This continued heavy rain and flooding has damaged homes, isolated communities, and displaced people from their homes,” said Queensland’s acting communities minister, Shannon Fentiman. The Insurance Council of Australia declared the floods a “catastrophe”, with thousands of properties at risk, and General Manager Karl Sullivan noted that high housing density in “hazard areas” was boosting the risk and cost of flooding.

“We’re building more things that are more expensive” in “risky places,” he said.

While one region of the Australian continent dealt with excess water, another area was suffering from its absence. With national elections coming up next month and climate change expected to be a top-line issue, “Prime Minister Scott Morrison and Opposition Leader Bill Shorten both visited Tasmania on Monday, where catastrophic bushfires had reportedly destroyed eight homes and burnt 190,000 hectares of land as of Monday afternoon,” the Sydney Morning Herald reports.

“Fires are a natural phenomenon in the Australian bush, but experts say climate change effects such as heatwaves and changed rainfall patterns mean bushfires are becoming more frequent and extreme,” the Herald notes. Earlier this week, decorated Australian firefighter Greg Mullins drew new attention to that risk, stating that “climate change is contributing to bushfires so horrendous that homes and lives cannot be protected, and the federal government will not acknowledge the link because it has failed on emissions reduction policy,” the paper adds.

“The extraordinary comments by Mr. Mullins, a former New South Wales Fire and Rescue Commissioner, coincides with the Tuesday launch of the group Bushfire Survivors for Climate Action, which will lobby the major parties to drastically reduce fossil fuel use and cut greenhouse gas emissions.”

In The Guardian, award-winning novelist Richard Flanagan says Morrison is trying to scare voters on economic policy—when he isn’t brandishing lumps of coal in the national legislature—not realizing they’re already scared about climate change. Flanagan’s post recounts Tasmania’s recent wildfires and its vulnerability to the climate crisis. (It’s much longer than we can summarize here, and you want to read every word.)

“Tasmanians find themselves living in a frightening new world where summer is no longer a time of joy, but a period of smog-drenched dread that goes on week after week, and it seems inevitable, month after month,” he writes. “Whole communities have been evacuated and are living in evacuation centres or bunking down with friends and families. Those that remain live in a fug of sleeplessness and fear, never knowing when the next ember attack will occur or a nearby fire will break containment lines, a gut-clutching terror of wind, smoke, and heat. Volunteer firefighters find themselves no longer fighting fires for a week but for a season. Government is confronted with the extraordinary cost of fighting fires of this size and scale for months.” 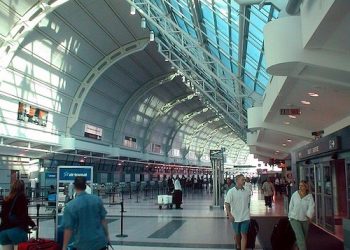