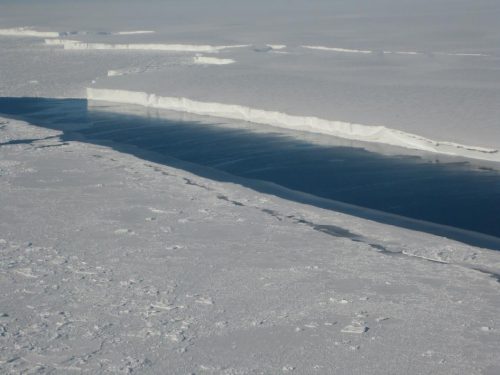 NASA researchers racing to understand how the rapidly melting West Antarctic ice sheet will affect sea level rise hope to learn a great deal from their recent discovery of a new, truly enormous hole in the underbelly one of its most unstable glaciers.

“According to a new study in the journal Science Advances,” reports Grist, “the hollowed-out section is two-thirds the size of Manhattan and 1,000 feet tall—big enough to have contained 14 billion tons of ice.”

Located on the underside of the Thwaites Glacier, the hole, which researchers suspect was hollowed out by the incursion of warm sea water beneath the glacier itself (which is not attached to bedrock), was discovered using aircraft equipped with ice-penetrating radar.

Though “just a tiny fraction of the Florida-sized glacier,” writes veteran climate analyst Eric Holthaus, the cavity “sends an ominous signal that the glacier’s collapse is proceeding faster than expected,” as it is believed to have formed in the last three years.

In a statement communicating this “ominous” signal to the public, study co-author and University of California Irvine Earth systems scientist Eric Rignot observed that “understanding the details of how the ocean melts away this glacier is essential to project its impact on sea level rise in the coming decades.”

Should the Thwaites Glacier melt completely away, explains Holthaus, sea levels could rise as much as 10 feet over the next century or so. “If we’re unlucky,” he adds, “much of that could happen in the lifetimes of people alive today, flooding every coastal city on Earth, and potentially grinding civilization to a halt.”

On the other hand, “with rapid emissions reductions, chances of catastrophic collapse of the glacier could be reduced to about 10% this century.”