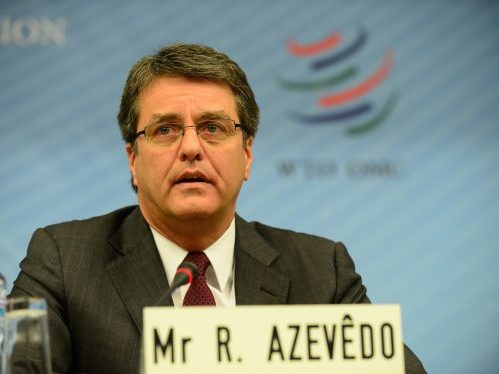 When the head of the World Trade Organization (WTO) says trade has no impact on the environment, we should all be worried.

On a Thursday late last month, as more than 30,000 students skipped school to cram the streets of Brussels and demand action on climate change, the 16-year-old Swede who inspired the remarkable global movement, Schools Strike 4 Climate, was taking her message to Davos.

Greta Thunberg told political and business leaders at the World Economic Forum that the future of humankind was in their hands.

“At places like Davos, people like to tell success stories. But their financial success has come with an unthinkable price tag. And on climate change, we have to acknowledge we have failed,” she said.

Yet while Thunberg—and a growing number of young people whose futures will be defined by climate breakdown—show startling clarity about its causes and the changes needed to halt it, some with the power to shape the planet’s future appear blind to reality.

The latest prime example is the head of the WTO.

On the same day Thunberg made her impassioned plea and Belgian students took to the streets, Roberto Azevêdo, director-general of the WTO, told another Davos audience that trade didn’t impact the environment.

In response to a question about the environmental impact of shipping goods around the world, he said: “I think sometimes things are catchy. For example, an important product is damaging to the environment. I don’t have any evidence in any of the literature I’ve read that supports that. Quite the contrary, I’ve read many, many papers and studies that show that products that find their way into the trade flows are usually much less harmful to the environment than the ones which are produced locally, because they have to observe the standards of the consuming country.”

He added: “This whole argument that there is an impact on the environment, I stand to be corrected, but I haven’t seen one, single credible study that shows that.”

When the leader of the body responsible for regulating international trade between 164 nations makes such a potentially damaging—and demonstrably untrue –claim, it’s hard to know where to start.

One place, though, would be the WTO’s own literature.

This report is merely the tip of the iceberg in the vast body of evidence confirming direct and indirect links between trade and deforestation, as well as other forms of environmental destruction.

A recent study showed that, between 2000 and 2011, the production of beef, soy, palm oil, and wood products in just seven countries (Argentina, Bolivia, Brazil, Paraguay, Indonesia, Malaysia, and Papua New Guinea), was responsible for 3.8 million hectares of forest loss annually—leading to 1.6 billion tons of carbon dioxide emissions per year.

If that’s not enough to convince Azevêdo, and the many who subscribe to his world view, then they could look at the Harvard study suggesting that trade and growth can exacerbate environmental degradation (particularly carbon dioxide emissions), this 2016 report showing that opening specific areas of the Amazon up to international trade increased deforestation, or for more corroboration, reports here, here, and here.

Evidence of the often terrible impact of global trade on the environment may be unassailable, yet the way forward is obviously not to cease trading. It is to create policies that respect the planet and people’s rights.

Thankfully, in contrast with Azevêdo’s irresponsible statement, some policy-makers are not oblivious to reality, and are attempting to do precisely this.

Among them is the French government, which in October 2018 published a new national strategy aimed at ending the deforestation caused by its imports of palm oil, soy, beef, cocoa, and wood. France also plans to encourage financiers to account for environmental and social impacts in their investment decisions. With the EU currently negotiating a raft of free trade agreements with forested countries, including the so-called Mercosur bloc, France’s lead sets an important example.

As the International Centre for Trade and Sustainable Development has made clear: like it or not, addressing climate change will affect trade policy. And to ensure that their policies fulfil both climate and trade objectives, policy-makers must understand what the linkages are.

Without trade agreements which tackle climate change and protect forests, the hopes of striking schoolchildren around the world—and everyone who cares about climate justice—will remain unfulfilled.

Or, as Greta Thunberg told her Davos audience: “Unless we recognize the overall failures of our current systems, we most probably don’t stand a chance.”