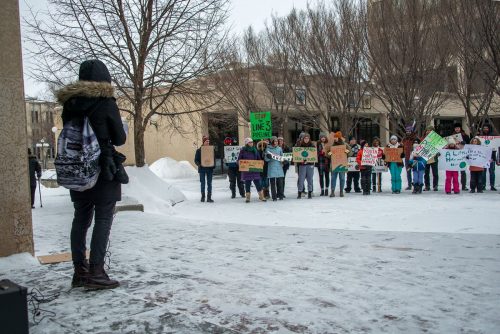 “Kids and teens across Canada followed in the footsteps of Swedish 16-year-old activist Greta Thunberg on Friday, walking out of class to rally against climate change inaction,” reported CBC’s nationally-syndicated Day 6 program. “Their weekly strikes, which are held in front of legislative buildings or in public parks and libraries, follow months of similar actions by students across Europe and Australia.”

The segment featured 16-year-old Rebecca Hamilton of Vancouver, 11-year-old Sophia Mathur of Sudbury, and 18-year-old Dominique Deveaux of Fredericton, all of whom have been organizing local school strikes in their communities.

“We can’t vote, but this is what we can do,” Hamilton said. “During World War II, everybody knew there was a war on. It was the lens through which every individual and government decision was made. I want the climate crisis to be seen with the same level of urgency and addressed with the same level of scale.”

“The scariest thing I can think of in the future is probably dying in anything that climate change causes—storms, droughts, heatwaves, forest fires, starvation,” Mathur added. “I want to see adults start cooperating and listening to the experts, and whatever they are saying, we have to do. Because my life, my family’s life, everyone’s life is at risk.”

“I’m worried about humanity’s fate. Mass migration, crop failures, the oceans could just basically die,” Deveaux told CBC. “We see the wildfires in the west and the flooding in Fredericton this summer. It’s stressing me out a lot. So, I walk out of class because it is so important.”

Last Monday, Keary-Matzner was one of the main speakers at a media event to unveil a provincial people’s climate plan developed by Toronto-based ClimateFast and DrawdownTO.

“This is a message from the children of #FridaysForFuture to Minister Rod Phillips. Your refusal to meet with us to discuss climate action as per our request has been marked as an absence. This absence is being reported as an offence against democratic and accountable government,” Keary-Matzner said, reading from a prepared statement.

“The premier of your government named Doug Ford was marked late today on climate action,” she continued. “The consequences of this will be lethal heatwaves, more extreme weather events, floods, wildfires, extended droughts, and a public health crisis. We wish this were just a joke. It’s not.”

The ClimateFast/DrawdownTO climate plan points to the IPCC’s 2030 deadline for humanity to reduce greenhouse gas emissions by 45%, to hold open the possibility of stabilizing average global warming at 1.5°C.

“The green transition can create thousands of jobs in emerging, innovative green industries, make our towns and cities more resilient, and leave Canada’s natural beauty intact for the enjoyment of future generations,” the plan states. “Unfortunately, the Ford government’s plan moves us backwards. It weakens our climate goals at a time when they must be more ambitious, eliminates mechanisms for the government to be held accountable, and fails to specify actions that will help us all prosper from a quick transition to renewable energy in our buildings and our transportation choices.”

The plan urges Ontario to “commit to and invest in” a target of 100% renewable electricity by 2030, account for the funds raised through the province’s previous carbon cap-and-trade program, create jobs and save Ontarians money by accelerating renewable energy and energy efficiency programs, make green transportation choices affordable and accessible, protect wilderness and green spaces, and account for the social cost of carbon.