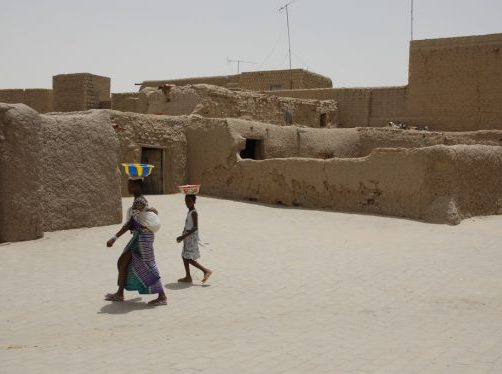 Climate change-driven temperature increases, drought, flooding, and food shortages are piling in behind an accelerating, years-long armed conflict to make Mali, one of five poor, fragile, and vulnerable states in the Sahel region of Africa, a crossroads for two massive, overlapping humanitarian crises.

“The fragility of Mali stares you in the face,” even though “it hasn’t been on our radar screens” until now, said Peter Maurer, president of the International Committee of the Red Cross (ICRC). “We often look at arms and armed actors, and maybe at underdevelopment, but now we see that climate change is leading to conflicts among communities and this is a different kind of violence.”

“On a visit to northern Mali with the ICRC, it was startling to see how the consequences of climate change are woven through the fabric of lives in what has always been a harsh existence on the edge of the encroaching Sahara desert,” the BBC reports. “Every story we heard in northern Mali was a tale of multiple threats, all terribly tangled.”

In the worst possible ways, northern Mali has it all: a major United Nations peacekeeping force and multinational terrorism force to combat three rising extremist groups, the worst rains in 50 years that washed away last year’s crop, degradation spanning 80% of the farmland across the Sahel, and a United Nations projection that the temperature increase across the region will be 1.5 times the world average. The BBC notes the population in the Sahel is doubling every 20 years, with “every generation more fragile than the last,” and “the World Bank says this region is falling behind every other in the global battle against poverty.”

Meanwhile, the armed conflict produced record violence against civilians last year, and the massive impact of alternating droughts and floods has “inflicted a huge cost on crops and livestock”, aggravating divisions between farmers and nomadic herders from different ethnic groups as the available resources shrink.

“There’ve always been small clashes between cattle herders and cultivators, but water levels are decreasing and that’s creating a lot of tension,” said herder Hammadoun Cisse, head of a reconciliation committee attempting to mediate local disagreements. He added that Islamist groups are only too happy to fan the flames.

“They come in as protectors of communities and then try to impose their way of living on us,” he told BBC. “We don’t accept this kind of Islamic culture with jihadi ideas, so this creates another conflict.”

The ICRC tour included a stop at a rehabilitation home in Gao for young men aged 13 to 17 who’d been forcibly recruited into the conflict. One of them told BBC he’d started work as a shepherd at age 13, staying behind to watch over the livestock after his family had to leave the region. “There was no rain, and nothing for the animals to eat. They died, one after the other,” he said. “To survive, I had no other choice but to join a group with guns,” earning US$3 per month working in camp kitchens and at checkpoints.

The BBC says the solutions to the crisis begin with the fact that most Malians live off the land. “Farmers are not alone,” said the ICRC’s Sossou Geraud Houndonougho, who works on water and sanitation in the city of Mopti. “We have to teach them not to just plant their own garden for their own family, but to work together to plant a forest for their community, for their future.”

Beyond that, Cisse added, “we should sit down and talk and see what we can do, not with arms but discussion, to narrow the gaps between us.”