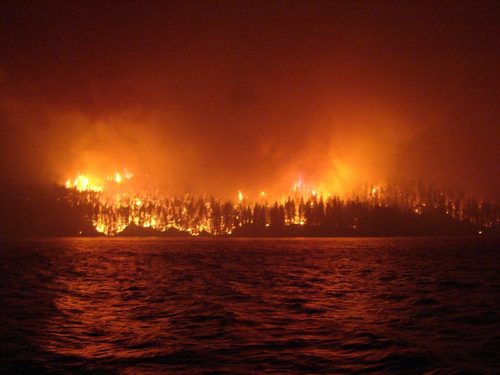 British Columbia’s “uncounted forest emissions” of climate-warming greenhouse gases in 2017 and 2018 were more than three times higher than the province’s emissions from all sources in 2016 and exceeded 400 million tonnes, according to an analysis released this week by Sierra Club B.C.

“The vast majority of the estimated 237 million tonnes emitted by B.C.’s forests resulted from another record-breaking wildfire season that burned more than 13,000 square kilometres of land,” CBC reports, citing the analysis. The findings “represent a major hole in B.C.’s climate plan and show the need for a provincial forest emissions reduction strategy.”

Sierra Club said the province’s forests absorbed 28 million tonnes of carbon dioxide in 2016, but have been a net source of atmospheric carbon since the early 2000s, emitting a net of about 209 megatonnes per year in 2017 and 2018. “The emissions result from logging practices such as clearcutting of old-growth forests and slash burning, as well as the increasing impact of climate change including pine beetle outbreaks and wildfires,” CBC notes.

The organization says the CleanBC climate plan announced last month by Premier John Horgan has no specifics to reduce forest carbon emissions, and the province fails to count forest emissions in its official greenhouse gas inventory.

“There’s no action in place to reduce these emissions,” Wieting told CBC. “Forest emissions are not counted and that’s the reason why they are largely ignored.”

University of British Columbia forestry professor Stephen Sheppard called for a “multi-pronged approach” to reduce the impact of forest fires on greenhouse gas emissions—and warned it would be expensive. “The budget we’ve had in the past to manage fires, which really meant suppressing fires, is probably very inadequate now,” he told CBC.

But on top of Sheppard’s to-do list, the province might also benefit from a to-stop list: In November, CBC reported B.C. was going out of its way to eliminate a form of natural fire protection for its forests, using the herbicide glyphosate to exterminate broadleaf trees that could help control the epic wildfires that afflict the province every summer.

“At the end of the day, we have rules that make fire-resistant trees illegal in our forests. That’s just nuts,” James Steidle of Stop the Spray B.C. said at the time. “The experts know this stuff. They’ve known about this stuff for decades. But it’s just not being translated into reality.”