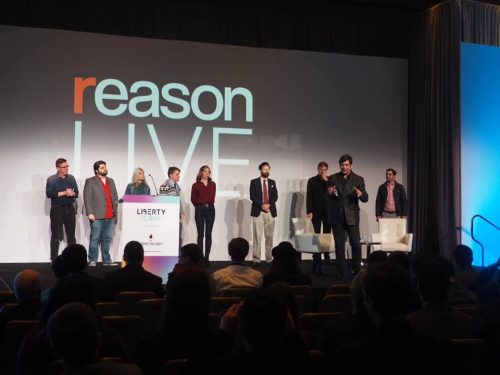 Google, Facebook, and Microsoft paid a combined US$45,000 to sponsor the annual convention of a libertarian student group that promotes climate denial, even though all three tech giants acknowledge the climate crisis and have been working to decarbonize their own operations.

When LibertyCon, the annual convention of Students for Liberty, went onsite at a downtown Washington, DC hotel earlier this month, its funding included a $25,000 platinum sponsorship from Google, and $10,000 gold sponsorships from Facebook and Microsoft.

“The donations put the tech companies in the top tier of the event’s backers,” Mother Jones reports, in a story republished by National Observer. “But the donations also put the firms in company with some of the event’s other sponsors, which included three groups [actually, at least four—Ed.] known for their work attacking climate change science and trying to undermine efforts to reduce carbon emissions.”

Those groups include the CO2 Coalition, which formed in 2015 to spread the “good news” about increased greenhouse gas emissions, as well as the climate-denying Mercer Family Foundation and the Charles Koch Institute. The Heartland Institute also bought a gold sponsorship.

The CO2 Coalition’s exhibit booth included brochures that declared its mission to “explain how our lives and our planet Earth will be improved by additional atmospheric carbon dioxide”. In a Saturday presentation, Coalition board member and retired statistics professor Caleb Rossiter cast carbon dioxide as a fertilizer that has made Africa greener, boosted food production, and reduced human misery.

“I’m happy when carbon dioxide is up, because it means poverty is down,” he said. “I come not to bury your carbon but to praise it.”

That position puts Rossiter “on the far fringes of the climate denial world,” Mother Jones notes. “Not even Exxon is trying to make such arguments anymore. And it’s a long way from what Google, Facebook, and Microsoft have said about the dangers of carbon dioxide; all three companies have committed to reducing their own carbon footprints.”

The three tech sponsors’ support for a libertarian conference “is not itself unusual, as governments around the globe move to try to regulate social media and online privacy. Tech companies see libertarians as natural allies in the fight against regulation,” the U.S. investigative publication notes. “But the companies’ underwriting of a conference with a climate denier on the schedule shows the hazards of trying to advance a policy agenda through interest groups without also supporting their fringe elements.”