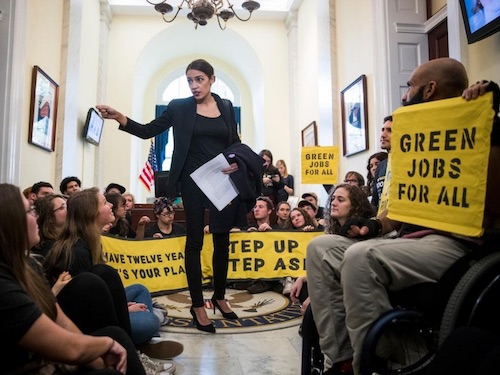 The prospect of a comprehensive Green New Deal to drive rapid decarbonization and create jobs in the United States has been receiving considerable air time in the U.S. congress and media. But with the specifics of the plan still taking shape, a tough political battle is already emerging between Democrats demanding 100% renewable energy by 2035, and a second contingent urging a 100% decarbonization target—a policy which would leave options like carbon sequestration and nuclear generation on the table.

Opinion research indicates support for at least some parts of the plan: in a poll of registered voters conducted by the Yale Program on Climate Change Communication (YCCC), 81% of respondents expressed moderate to strong support for “a rapid transition to 100% renewable electricity and other green technology initiatives,” DeSmog Blog reports, even though most had heard nothing whatsoever about the Green New Deal itself.

“Notably,” writes DeSmog, “the poll’s language focused on renewable electricity and job creation, but made no mention of the full decarbonization and social overhaul of the American economy that also are central tenets of the full Green New Deal.”

And it remains to be seen whether the full Deal won’t prove too much for centrist Democrats, E&E News reports. Another “litmus test” of climate street cred, the No Fossil Fuel Money Pledge, is gaining widespread support among Democrats: Sen. Elizabeth Warren (D-MA) recently signing on, and “at least three other potential 2020 candidates—Washington Gov. Jay Inslee, Hawaii Rep. Tulsi Gabbard (D-HI), and Sen. Bernie Sanders (I-VT)—have also sworn off fossil fuel campaign dollars.” [Gabbard has since declared for the Democratic nomination—Ed.] But some Democrats are questioning the strategic wisdom of the Deal as written.

Because the Green New Deal “remains a nebulous set of proposals,” even supporters like RL Miller, political director of Climate Hawks Vote, are uneasy.

That kind of wiggle room has some urging climate activists to stick to pressuring Democratic candidates to refuse fossil dollars. Paul Bledsoe, an energy fellow at the Progressive Policy Institute, agreed with Miller that the Green New Deal is “becoming ‘an empty vessel’ for candidates to fill in for themselves ‘because the actual language, at its core, is a political nonstarter’,” E & E reports. “Any credible Democratic presidential candidate is going to have to have a truly ambitious, robust climate policy to gain the nomination,” he said. But “that said, anyone who proposes phasing out fossil fuels by 2030 is going to get laughed out of Iowa,” traditionally one of the first states in the U.S. presidential primary season.

Undaunted, proponents of the Green New Deal submitted an open letter articulating its core values more clearly to the House of Representatives on January 10. With 643 signatories representing environmental, faith, labour, and other citizen groups across the nation, the letter had considerable support—although, as Grist notes, neither the U.S. Sierra Club nor the Natural Resources Defense Council signed it.

More concerning to the long-term survival of the Deal, however, are the quarrels present and brewing among its proponents. Grist says a major effort is now under way to find common ground between the young, media-savvy creators of the Deal itself, and those who have long been battling in the trenches of climate justice activism.

“To understand the debate surrounding the Green New Deal,” Grist notes, “you need to look beyond its recent prominence in Beltway political circles to the on-the-ground organizations that make up the environmental justice movement. Newcomers like [Alexandria] Ocasio-Cortez (D-NY) may be leading the charge, but grassroots leaders who have spent years advocating for low-income families and neighbourhoods of colour most impacted by fossil fuels say their communities weren’t consulted when the idea first took shape.”

While the Climate Justice Alliance, an umbrella group representing Indigenous peoples, labour, and other front-line communities, did sign the open letter to the House in support of the Deal, it told Grist its initial reaction to the initiative was that it had been crafted at the “’grasstops” as opposed to the grassroots, writes Grist’s Justine Calma.

More inclusive consultation will be imperative, the Alliance told Grist, or “the plan won’t meet its proponents’ lofty goal of tackling poverty and injustice. Nor will the deal gain the grassroots support it will likely need to become a reality.”

And that’s just one of the two, potentially intractable fault lines the plan faces. The other one centres on the open letter’s declaration that, “as the United States shifts away from fossil fuels, we must simultaneously ramp up energy efficiency and transition to clean, renewable energy to power the nation’s economy where, in addition to excluding fossil fuels, any definition of renewable energy must also exclude all combustion-based power generation, nuclear, biomass energy, large-scale hydro, and waste-to-energy technologies.”

For veteran Vox.com climate columnist David Roberts, evangelizing the need for 100% renewables is something to be studiously avoided, at least for now.

Getting the Green New Deal from “lofty goals to a concrete policy program” is “inevitably going to be a contentious process,” he writes. “Though everyone (on the left, anyway) may agree about the GND in the broadest terms—a program to address climate change that is just, fair, and adequate to the task—the minute the discussion moves a level deeper, into specifics, the battles begin.”

Roberts allows that “many of those battles are unavoidable. For instance, the question of ’how to pay for it,’ or whether it needs to be ‘paid for’ at all, must eventually be settled.”

But other potential flashpoints can be saved for a later day, he contends. “To wit: The GND is centrally concerned with clean energy, but what exactly is clean energy? What counts and what doesn’t?”

Though some of the groups behind the open letter to the House “later clarified that they meant no new nuclear or hydro — not shutting down existing plants,” Roberts says the framing still left out potential supporters who are convinced rapid decarbonization just won’t be possible without the technologies the letter excludes.

“If the GND insists from the outset on 100% renewables, it will immediately lead to infighting,” he writes. “Policy wonks will attack it as unnecessarily expensive; anyone who believes in a role for other carbon-free resources (which includes more than a few on the centre-left and right) will be shut out.”

While “the debate over how far renewables can go, whether they can ever get to 100%, is fascinating and important,” he adds, “it doesn’t need to be resolved now. We don’t need to have this fight. The language of the GND can, and should, focus on what matters: carbon,” at a time when “the overwhelmingly salient fact is that carbon emissions need to be rapidly reduced and eliminated from the electricity sector. Everyone who understands climate change understands that basic imperative.”

While not everyone fully appreciates the “many powerful social and economic forces pushing against decarbonization,” he continues, “to be a climate hawk is to recognize the existential stakes of the climate crisis, and the unfathomable difficulty of the challenge ahead. It is to recognize that, for the time being, climate comes first, even if it entails some unpleasant trade-offs.”

Which means that, “even if the GND targets carbon-free energy at the headline level, there’s no reason environmentalists can’t go right on fighting for policies that support renewables. Everyone can continue to fight for the carbon-free sources they most support or believe in, including nuclear fans, CCS fans, whoever,” Roberts says. “They would just be doing so under a common banner, a common understanding of the imperative to reduce carbon emissions quickly,” thereby delivering “the social consensus that is desperately needed. It would be a shame to fracture or conceal that consensus over non-carbon disagreements.”

Thunberg Addresses World Economic Forum: ‘Our House is On Fire’