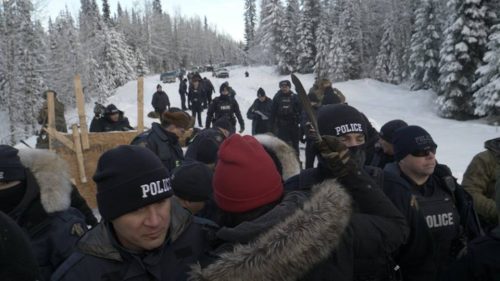 Construction crews working on the controversial Coastal GasLink pipeline are bulldozing traplines in Wetsu’we’ten territory in northeastern British Columbia, the community is warning, in violation of the Wildlife Act and in spite of an agreement between hereditary chiefs and the RCMP that called for no interference with traplines or other traditional practices.

“The destruction of our traplines is a direct threat to the programming of our healing centre and the wellness of our clients,” the community writes. “We know from our oral histories that this area, now being destroyed for a CGL man camp, has been used by our trappers for thousands of years.”

Coastal GasLink “has not undertaken proper consultation or made any agreement with our Hereditary Chiefs,” the community adds. “We do not consent to any aspect of this project,” yet “our trappers face arrest if they attempt to access their traplines, while CGL bulldozers are being permitted to plow through them.”

Bennett “would not say whether she believes the hereditary chiefs of the Wet’suwet’en First Nation have jurisdiction over the 22,000 square kilometres they claim as their traditional territory, saying that it is up to each community to determine its leadership structure,” The Canadian Press reports. “But she says the situation is an example of why the federal government is working to increase First Nations capacity for self-governance, including a new funding program to rebuild hereditary structures.”

“I think that we’re in this transition, hopefully transformation, to be able to get more and more communities out from under the Indian Act so that there isn’t this question of who speaks for the community, as they choose a governance of their own making,” she said.

Bennett characterized her department’s Nation Rebuilding Program as an attempt to counter past federal policies that imposed the elected band council system on First Nations and “had the effect of breaking up larger nations into ‘villages,’” CP adds. She “defended the hereditary system against criticism that it is undemocratic, saying there have always been traditional checks and balances for hereditary leaders.”

“When you talk to the best knowledge keepers, there were always ways of dealing with people who were not serving their communities well,” Bennett said. “These systems were in place long before the settlers showed up.”