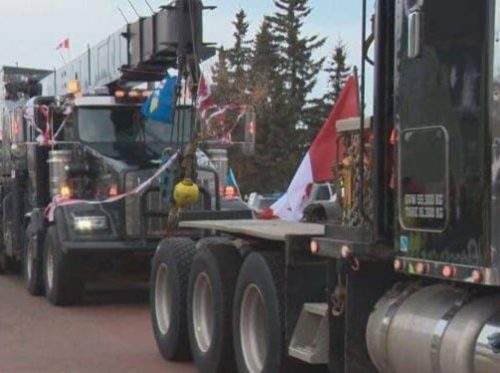 One of the two dueling convoys sending pro-pipeline protesters to Ottawa has folded. The announcement Monday by fossil-funded Canada Action leaves the route along the eastbound Trans-Canada Highway open to Yellow Vests Canada, a group that seems at least as interested in arresting Prime Minister Justin Trudeau for “treason” and vilifying ex-U.S. president Barack Obama and billionaire philanthropist George Soros as it is in seeing new pipelines built for the Alberta oilpatch.

“We cannot confidently mitigate the unexpected challenges associated with this event. As such, we will be issuing full refunds to all of our donors,” said an update on the crowdfunding site for Rally 4 Resources, Canada Action’s partner in the second convoy.

“The convoy was set to leave the same day, and along the same route, as one organized by the yellow vest protest movement,” CBC reports. Yellow Vests Canada has “targeted a wide swath of grievances—from the Trudeau government, to carbon tax, to immigration. Politicians and other protest groups have distanced themselves from yellow vest protests in Alberta, which have welcomed attendees like members of the anti-immigration group Soldiers of Odin.”

JWN Energy says organizers of the now-defunct convoy had raised C$43,240 of their $250,000 crowdfunding goal. Yellow Vests had brought in more than $110,000 as of last week, The Energy Mix reported Monday, citing the Globe and Mail.