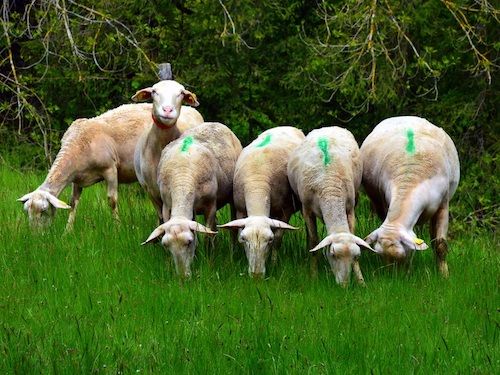 A small town in northern California is turning to one of the most charming natural climate solutions known to humanity to get a leg up against killer wildfires.

Nevada City, population 3,100, wants to bring in a herd of goats to remove brush that would otherwise become wildfire fodder, in a move that pits one unstoppable force of nature against another.

The community has “launched a ‘Goat Fund Me’ campaign to rent ruminants to manage city land,” Grist reports, and “the graze is catching on: Prescriptive grazing has been getting more popular throughout the Golden State and elsewhere as the threat of wildfires looms large. (Turns out, chompers are way more effective than rakes.)”

A herd of 200 goats can clear an acre of accumulated brush per day, a town official told the Los Angeles Times. “It’s the same principle behind a controlled burn—but with cute, furry faces,” writes Grist editorial intern Claire Elise Thompson. “Herds are available for rent in the area for anywhere from US$500 to $1,500 per acre, depending on the terrain.”

Nevada City is looking for $30,000 in time to book the goats from local ranchers this winter, since they’re already fully occupied for the rest of the year. “In the future, the city says it will look for grant funding for prescriptive grazing, and will also teach residents about reducing risks on their own property.”

Good gracious = something sensible !! Whatever next ?