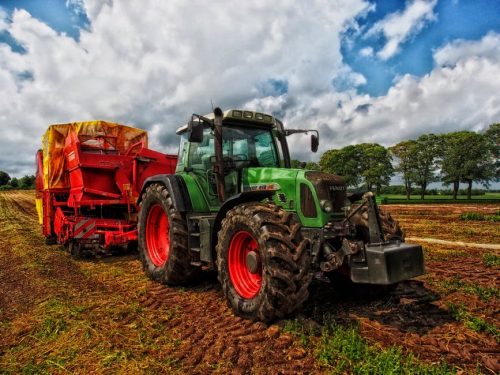 A farmer in Uxbridge, Ontario has traded in his old, noisy diesel tractor for one of 10 electric prototypes developed in 2018. On top of a healthier, more pleasant ride while he works, he makes money when his new 10-kilowatt solar array sells surplus power back to the provincial grid.

Tony Neale “has been running Wheelbarrow Farm since 2008, selling much of his organic produce at farmers’ markets around the GTA,” the Toronto Star reports. “He knows his customers appreciate the fact that he is both local and organic. Now, he’s got an additional feature: Low carbon.”

“It’s beyond proof of concept. We’re past that. This is proof of commercial viability,” Neale said. “It’s not just a dream that one day you’ll be able to farm without fossil fuels. It’s real. It’s here.”

Neale first started thinking about solar-electrics while “riding on the back of a clunky diesel tractor whose engine can be deafening and exhaust can be noxious,” the Star reports.

“It’s just as loud as you’d think,” Neale said. “You can’t hear anything. You have to wear ear plugs. And even then, you’re still breathing diesel fumes all day.”

With electric cars starting to show up on city streets, he figured there must be something available for farms. “After a bit of Internet searching, Neale was able to find examples of farmers who had stripped down old tractors, added electric motors and batteries,” and one engineer had received a National Science Foundation grant to commercialize the world’s first purpose-build electric tractor prototype. Neale flew to California to help assemble one of the 10 Solectrac prototypes, put it through a month of field testing, had it shipped home, then got the solar panels in place, thanks to loans from customers who supported his shift to low-carbon farming.

“I wanted to invest in this technology for environmental reasons. But using it, I was blown away by the experience of driving,” Neale said. “It’s silent. There’s no exhaust. You can hear the birds and talk to people working in the fields. You can feel the wind on your face and smell the fresh country air.”

The units have the equivalent of a 40-horsepower diesel engine, and will eventually retail for US$40,000, about the cost of a diesel model. “But the operation is 10 times cheaper,” he said, echoing one of the key advantages you hear about from other electric vehicle owners. With just one moving part, compared to more than 300 in a diesel engine, “there are no fuel costs and little to no maintenance.”