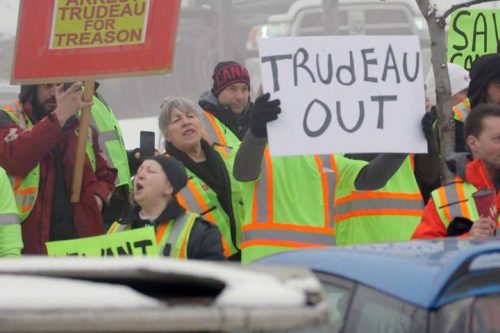 The vaunted protest convoy that fossil interests in Alberta and Saskatchewan are vowing to send to Ottawa in February is still more than a month away. But organizers are already at pains to distinguish between “legitimate” (and often fossil-funded) protesters, and an upstart group modeled on the gilet jaunes (Yellow Vest) movement in France, to which a collection of anti-immigration white supremacists appear to have latched on for the ride.

In late December, Global News documented a Yellow Vest protest at the Alberta legislature in Edmonton, where violence broke out and participants were seen wearing patches from the far-right Soldiers of Odin on their jackets. Global said that presence was “similar to previous rallies,” adding that the reasons for a series of protests leading up to the December holiday “range from opposition to the carbon tax and delays in pipeline construction to Canada’s signing of the United Nations migration pact.”

“Our energy allies are laughing at us. They’re robbing us blind and our elected [representatives] in the Supreme Courts, at the elected positions, federally and provincially, are doing nothing but taking a fat paycheque,” said oil and gas worker Mike Wipf.

Another protester, who declined to be identified, opined that “all the laws that were made for 150 years to keep me safe and you safe, our children, our grandchildren, have been changed. Those laws have been changed. We’re now bringing in ISIS members.”

“There’s some confusion online about who is running the show and where to direct fundraising dollars,” JWN reported. “That’s because there are two different convoys being organized for the same week in February.”

JWN made it pretty clear which side it’s on. “One is affiliated with Yellow Vests Canada, and the other is by a coalition of grassroots resource advocacy groups led by Canada Action and Rally 4 Resources,” wrote reporter Deborah Jaremko. “While Yellow Vests Canada is a recent phenomenon taking inspiration from protests in France, which have turned violent and are associated with radical groups, Canada Action and Rally 4 Resources have been working on Canadian oil and gas issues for years.”

She added that “the confusion about who’s who was evident last week when former Saskatchewan premier Brad Wall corrected a tweet he posted on Thursday morning linking to a Yellow Vest convoy GoFundMe page with another a few hours later that said: ‘Here’s the right one. Fundraiser by Rally 4 Resources: Official Resource Convoy to Ottawa 2019.’”

The Narwhal (then publishing as DeSmog Canada) reported in 2015 that Canada Action had “deep ties” to the Conservative Party and the oil and gas industry.

While “Canada Action/Rally 4 Resources is adamant about being non-partisan and singularly focused on resolving the challenges facing the oil and gas sector,” JWN reported, Yellow Vest Canada spokesperson Jenna Bain “told JWN that the Yellow Vest group’s number one priority is that ‘Justin Trudeau must go,’ followed by ‘“pro-pipeline’ at number two.” Bain said her group had reached out to the more established organizations, but was rebuffed.

“We’re going to do a convoy, other people want to do a convoy too; it is what it is,” responded Canada Action organizer Cody Battershill. “We just need to make sure that the message that’s being sent around supporting the energy sector is not lost in conversations around other issues.”

Bain said her group believes Ottawa “is putting its citizens in danger,” JWN added. “Our government works for us, not the other way around. Trudeau has gotten away with avoiding the hard questions and not being accountable while twisting his words to fool us for too long,” Bain wrote in an email.

Last week, Global reported, Facebook began removing comments from the Yellow Vests Canada group, and took down the whole page for a few hours, after participants repeatedly called for the assassination of Prime Minister Justin Trudeau. While page administrators disavowed the posts, Global states, “comments wishing for and advocating the death of the prime minister remained on the page” after it was reinstated.

Last week, CBC confirmed the two convoys will have nothing to do with each other.

“They don’t want to cooperate with us. We’ve reached out to cooperate with that group and they want to do their own thing and get the recognition for it,” said organizer Glen Carritt. “At the end of the day, there’s one highway, and we want to make sure that our movement is peaceful and that we allow for vehicles, like the working class person to make sure they’re getting to work,” he added. “We don’t want to disrupt anybody’s life because of this, other than when we get to Ottawa.”

Late last week, Alberta Premier Rachel Notley urged pro-pipeline protesters to stay clear of extremism. “I think that many of us agree that in order to deliver that message, we need to be reasonable and stick to the issues and not let these kinds of protests be taken over by people with more extreme views,” she told media. “Because I think that hurts those stand-up, hard-working folks who are just trying to get across to the rest of Canada how much Canada needs us to be doing well.”

Alberta opposition leader Jason Kenney “has also raised concerns that side issues or extremism could overshadow the pro-pipeline message,” the Globe and Mail reports. “He has condemned what he described as a handful of people at the pipeline rallies with ‘kooky ideas’,” tweeting that “it’s wise to keep the focus on the energy issues.”

But Kenney’s United Conservative Party has had its own problems with white supremacists, and the Globe says Yellow Vests Canada has raised more than C$110,000 for its convoy, compared to more than $40,000 for Canada Action.