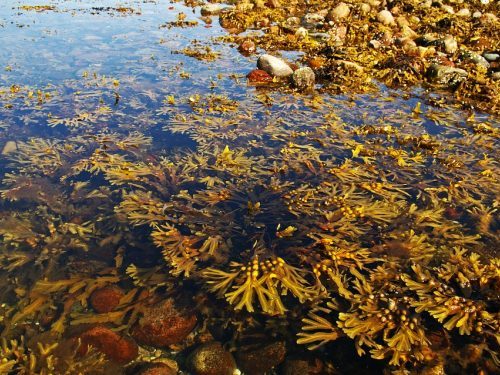 Researchers at Tel Aviv University say they’ve come up with a new polymer for bioplastics derived from microorganisms that feed on seaweed, using a process that delivers a biodegradable product and no toxic waste.

Professors Alexander Golberg and Michael Gozin published their results this month in the journal Bioresource Technology.

“Plastics take hundreds of years to decay. So bottles, packaging, and bags create plastic ‘continents’ in the oceans, endanger animals, and pollute the environment,” Golberg said. “Plastic is also produced from petroleum products, which has an industrial process that releases chemical contaminants as a byproduct.”

While bioplastics “don’t use petroleum and degrade quickly,” he added, they “also have an environmental price—to grow the plants or the bacteria to make the plastic requires fertile soil and fresh water which many countries, including Israel, don’t have. Our new process produces ‘plastic’ from marine microorganisms that completely recycle into organic waste.”

The microorganisms in Golberg’s and Gozin’s new process produce a bioplastic polymer called polyhydroxyalkanoate (PHA), CleanTechnica reports. “Our raw material was multi-cellular seaweed, cultivated in the sea. These algae were eaten by single-celled microorganisms, which also grow in very salty water,” Golberg explained.

“There are already factories that produce this type of bioplastic in commercial quantities, but they use plants that require agricultural land and fresh water. The process we propose will enable countries with a shortage of fresh water, such as Israel, China, and India, to switch from petroleum-derived plastics to biodegradable plastics.”

The next step is to move the new process out of the lab and into commercial production. “We have proved it is possible to produce bioplastic completely based on marine resources in a process that is friendly both to the environment and to its residents,” he said. “We are now conducting basic research to find the best bacteria and algae that would be most suitable for producing polymers for bioplastics with different properties.”