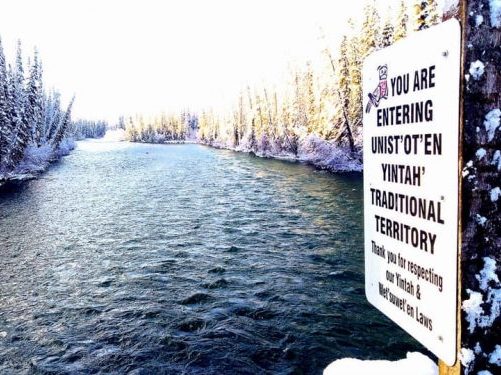 Members of the Wet’suwet’en Nation blocking access to TransCanada’s hotly-contested Coastal GasLink pipeline construction site have agreed to allow the company’s workers access through the Unist’ot’en protest camp near Houston, British Columbia, after the Nation’s five hereditary chiefs negotiated a deal to prevent a second RCMP raid on their territory.

“For now, there is a peaceful resolution,” said hereditary Chief Madeek (Jeff Brown). “The injunction said to grant access, so if we grant access, that should be good enough,”

“The agreement follows talks with the RCMP and a demand that police not interfere with residents of a healing lodge on the blockade site, and that members of the Wet’suwet’en clans continue to have access to the backcountry for trapping,” the Globe and Mail reports.

Hereditary Chief Na’Moks (John Ridsdale) “said all the hereditary chiefs were in agreement on how they’d like to see things go forward in the near future, out of concern for how a second wave of RCMP enforcement might unfold,” CBC adds. “He said the last word on the agreement made among the chiefs and presented to the RCMP was up to hereditary Chief Knedebeas because it’s his territory.”

“He does not want any more of our people traumatized or arrested. And the trauma that has happened to the people that are there right now is our worry,” Na’Moks said. “It’s very insulting, but it’s negotiations, a give and take. We need to look after our people. But there will be no construction, that must be made very clear.”

The deal most definitely does not mean the chiefs are “consenting to the Coastal GasLink pipeline being built through their traditional territory,” CBC states. “Rather it’s a temporary solution to de-escalate things while everyone figures out their next moves.”

The Aboriginal Peoples’ TV Network calls the result an “uneasy peace”, with at least one protest leader storming out of a closed-door meeting and slamming the door after hearing about the agreement. The RCMP negotiator was Deputy Commissioner Brenda Butterworth-Carr, a member of the Tr’ondëk Hwëch’in Han Nation in and around Dawson City, Yukon, and CBC says all three members of the RCMP liaison team were First Nations officers with ties to B.C. nations.

Wet’suwet’en protester Brenda Michell said she was nervous about an agreement that opened the gate to the Unist’ot’en camp to Coastal GasLink contract workers. “The gate is protecting us from the outside,” she told APTN. “I can sleep at night knowing it’s there.”

“As details of the agreement were described to those at the Unist’ot’en healing centre Wednesday, it was clear people there still had concerns about their safety moving forward,” CBC adds. “In particular, people at the centre were concerned about completely dismantling the gate to Unist’ot’en, allowing access to anyone who makes the drive up the remote logging road. The camp was first established in 2010 and has year-round residents, with many people coming to the area to reside at the healing centre.”

Prime Minister Justin Trudeau took strong criticism for the government’s handling of the blockade during a Wednesday evening town hall session in Kamloops. “While Trudeau was answering a question on accountability for the oil and gas industry, a man stood up in the crowd and began to yell that the prime minister had lied about wanting reconciliation with First Nations,” CBC notes.

“You’re getting people arrested,” the man said. “You’re a liar and a weak leader. What do you tell your children?”

“We’ve gone from a place where Indigenous people were not listened to, were not consulted, were not included and we are doing a better job of it,” Trudeau replied.

The previous day in Ottawa, Trudeau was forced to change the location for his speech to an annual forum on First Nations treaties after the original venue was overtaken by “a long column of demonstrators,” National Observer reports. “We recognize that when our relationships are based on the recognition of rights, respect, cooperation, and partnership, we deliver better results for everyone—stronger communities, healthier citizens, thriving cultures, and greater economic success,” the PM said when he eventually delivered his speech.

While the drama at Unist’ot’en camp has been front and centre in recent days, there’s another barrier ahead for Coastal GasLink. CBC reports the National Energy Board is still deciding whether the 670-kilometre, C$4.8-billion pipeline should be subject to federal regulatory review, a process that could delay the project by months.

“A hearing has not yet been scheduled, but the NEB has listed several filing deadlines between January and March,” CBC states. “TransCanada said in filings from an earlier phase in the process that if the NEB even entertained the jurisdictional question it would have grave implications.”

In October, the company said it was disappointed the NEB agreed to consider arguments on whether it had jurisdiction over the project. “It would create regulatory uncertainty and inefficiency at a time when these issues are jeopardizing Canada’s global competitiveness,” the company warned. “It would put real, tangible benefits to people in B.C., including First Nations, at risk.”

Last October, The Narwhal published a profile of Michael Sawyer, the resident of Smithers, B.C. who first made the case that Coastal GasLink should fall under federal jurisdiction, despite what TransCanada claims was a “robust”, two-year review by the provincial government.

Although the pipeline “is set to be built entirely within B.C.—which would usually put it under the jurisdiction of the province—the pipeline, which would supply the LNG Canada export terminal in Kitimat, connects to an existing pipeline system that is federally regulated,” the publication noted. “Also, Coastal GasLink Pipeline Ltd. is a wholly-owned subsidiary of TransCanada Pipeline Ltd., which means under the Constitution Act the pipeline is within federal jurisdiction and should be regulated by the National Energy Board, Sawyer says in an application to the board.”