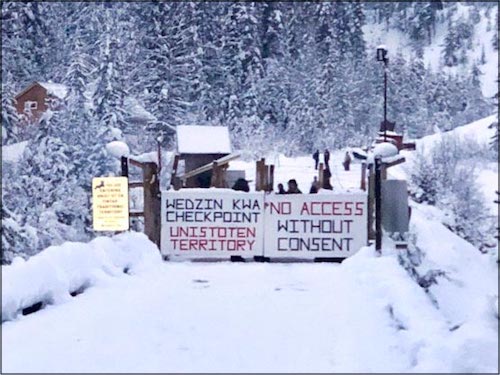 Negotiations were under way between RCMP and hereditary chiefs of the Wet’suwet’en Nation Tuesday night, aimed at finding a “peaceful solution” to a standoff that led to 14 arrests when police dismantled the first of two checkpoints set up to stop TransCanada Corporation’s Coastal GasLink fracked gas pipeline.

The 670-kilometre pipeline, from the Dawson Creek area to Kitimat, British Columbia, would supply natural gas to the C$40-billion LNG Canada liquefied natural gas megaproject, an undertaking that could become the biggest capital project in B.C. history and blow a massive hole in the province’s greenhouse gas reduction commitments.

During the raid on the Gidimt’en checkpoint, some of the people at the station avoided arrest and retreated to the Unist’ot’en Camp 20 kilometres away.

“The people who escaped to the healing centre are in trauma,” Hereditary Chief Na’Moks (John Ridsdale) told the Aboriginal Peoples Television Network. “We are in discussions with the RCMP and we will only allow them in after agreements are made.”

“Na’Moks said the chiefs want a non-violent end to the standoff, which saw people inside the healing centre spend the day ‘singing and drumming’ to keep calm,” APTN reports. Office of Wet’suwet’en Executive Director Debbie Pierre “said the meeting with RCMP was under way in Smithers, and the chiefs would share the outcome with the public Wednesday morning.”

The Star Vancouver previously reported that land defenders had retreated from the Gidimt’en checkpoint, about 65 kilometres outside the town of Houston, B.C. “I love waking up to the sound of a helicopter,” one defender said Tuesday morning.

“It’s our land, it’s our people, it’s our air, it’s our water, it’s our future, it’s our past, it’s everything,” Na’Moks added. “No money can buy this…We lose this, we lose our culture.”

He said he had just walked out of a meeting with RCMP because he “had other work to do and could not spend time speaking with representatives of a police force that had just the day previous disrespected his people,” the Star Vancouver recounted. “You don’t go and hurt our people and come in here the next day and say ‘I’m sorry’,” the chief said. “You bring out machine guns on our people? Force our people to run? Put our people through trauma? And then next morning ask to meet with us? And they want to shake our hands? No. You don’t do that.”

After the RCMP said they wanted “dialogue” with the Wet’suwet’en, Na’Moks said they’ll have to build trust with the community first. “We understand the RCMP was doing what they were ordered to do,” he told CBC. “I don’t hold animosity against any human being. But I do have an issue when industry is steering a government which orders the RCMP to do what they did to our people yesterday.”

Wet’suwet’en Nation member Mike Ridsdale, environmental assessment coordinator for the Office of the Wet’suwet’en, said government and industry are not only ignoring the community’s legitimate environmental concerns, the Star notes. They’re also bringing shame to the chiefs they sought to work with—and the chiefs have a long memory.

“That shame isn’t just shaming (a chief) in front of the government but it’s shaming him in front of his other members of his house group and his clan, and that’s a disrespect that isn’t tolerated by the hereditary leaders,” he said. “Eventually, government’s going to come around like they have in the past and say, ‘We apologize’. But that takes years. And years later, the destruction of the land’s already done.”

The raid and subsequent negotiations were triggered by a December 14 B.C. Supreme Court ruling that granted Coastal GasLink an interim injunction to remove the blockade. “Instead of removing it, opponents set up a second checkpoint, the Gidimt’en checkpoint,” the Globe and Mail reports. The paper explains that the Gidimt’en are one of five clans of the Wet’suwet’en, one of the First Nations involved in Delgamuukw v. British Columbia, a landmark case in 1997 that recognized Indigenous claims to ancestral lands they never ceded by treaty.

Coastal GasLink said it has signed agreements with all the First Nations along the pipeline route. “But demonstrators argue Wet’suwet’en house chiefs, who are hereditary rather than elected, have not given consent,” National Observer notes. “A news release issued Sunday on behalf of Grand Chief Stewart Phillip of the Union of B.C. Indian Chiefs says all five Wet’suwet’en clans, including the Gidimt’en, oppose the construction of oil and gas pipelines in their territory.”

“The provincial and federal governments must revoke the permits for this project until the standards of free, prior and informed consent are met,” Phillip said.

Ahead of the RCMP action, a statement from the Unist’ot’en Camp called the raids an “act of war”, the Globe reports.

“The RCMP’s ultimatum, to allow TransCanada access to unceded Wet’suwet’en territory or face police invasion, is an act of war,” it continued. “Canada is now attempting to do what it has always done—criminalize and use violence against Indigenous people so that their unceded homelands can be exploited for profit.”

That same day, an RCMP statement expressed respect for the Wet’suwet’en culture and stressed “the importance of open and direct dialogue between all parties involved in this dispute.”

On the Dogwood Initiative website, Communications Director Kai Nagata traces the sequence of Supreme Court of Canada rulings, from Delgamuukw in 1997 to the Tsilhqot’in decision in 2014, that established Aboriginal title over specific pieces of land where Indigenous nations and the Crown have never signed a treaty. In Delgamuukw, he writes, “the court was talking about the land where this raid is taking place.”

Nagata says it was no mistake that TransCanada went for a quick injunction against the Wet’suwet’en “before the legal ground could shift under their Coastal Gaslink project.” If the community had gone back to court, “many legal scholars say the strength of their claim to their territories would eventually force the Canadian government to relinquish thousands of square kilometres within the Bulkley and Skeena watersheds— and stop calling it ‘Crown land’.”

Which might have spelled disaster for the $40-billion LNG Canada megaproject, which has enjoyed political support and lavish subsidies from B.C.’s Liberal and NDP governments, and from the Trudeau Liberals in Ottawa. “Without a four-foot diameter (122-centimetre) pipeline feeding fracked gas to the marine terminal, the LNG Canada project is a non-starter,” Nagata writes.

Which brings the focus back to all the talk about “reconciliation” and how to enshrine the United Nations Declaration on the Rights of Indigenous Peoples in B.C. law, when Article 10 of UNDRIP states that “Indigenous peoples shall not be forcibly removed from their lands or territories.” This week’s arrests are hard to reconcile with that basic right.

“Pro-pipeline pundits are already working hard to spin this raid as the ‘rule of law’ being asserted over the objections of ‘protesters’. They point to benefit agreements signed between TransCanada and many band governments along the pipeline route,” Nagata notes.

“But under the Indian Act, elected councillors only have jurisdiction over reserve lands—the tiny parcels set aside for First Nations communities that are administered much like municipalities. That’s not where this pipeline would go,” he adds. “What is at stake in the larger battle over Indigenous rights and title are the vast territories claimed by the Crown but never paid for, conquered, or acquired by treaty. In Wet’suwet’en territory, those lands, lakes, and rivers are stewarded by hereditary chiefs and their relatives under a governance system that predates the founding of Canada.”

APTN reports that thousands of protesters gathered across Canada Tuesday as news of the RCMP raids spread. “Elders, women, youth, land defenders, and allies gathered at government legislatures, city squares and outside Prime Minister Justin Trudeau’s constituency office in Montreal,” the network recounts. “They held round dances, offered speeches, and demanded an intervention into the forced removal of Wet’suwet’en people from their unceded lands.”

“The RCMP, proudly suppressing Indigenous rights since the 1880s,” read one sign on Parliament Hill.

“This is where I really need to be, with the people who stand behind our nation, our people,” said protester Marlene Hale, one of 100 outside Trudeau’s constituency office. “We’re out in the cold doing what we should be doing, which is really beautiful to see.”

Hale, a member of B.C.’s Witset First Nation, added that “it was sad to see, especially when I see it’s my Elders, my chief, my family and my cousins.” But “I don’t feel helpless. I’m doing what I can, how I can to pass the message on. That’s the most important [thing].”