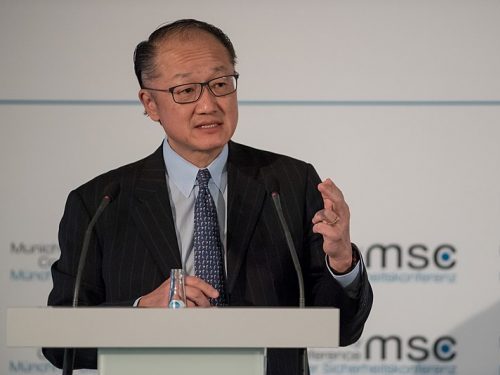 World Bank President Jim Yong Kim shocked the international aid community Monday with the sudden announcement that he will step down February 1, 3½ years before his term was due to end, in what sources cast as a “personal decision” to accept a position with a private investment firm.

“The opportunity to join the private sector was unexpected,” he said, in a letter to staff that the Guardian interprets as a “veiled criticism” of the Bank. “But I’ve concluded that this is the path through which I will be able to make the largest impact on major global issues like climate change and the infrastructure deficit in emerging markets.”

Last month, Kim announced the Bank would double its climate fund, to a total of US$200 billion for 2021 to 2025. But the timing of his departure may put that commitment in doubt. “U.S. presidents have traditionally appointed the head of the World Bank, while European governments normally decide the managing director of the International Monetary Fund,” The Guardian explains. “Kim’s abrupt resignation leaves Donald Trump with the opportunity to appoint a successor,” and “Trump is expected to use his effective power of veto to make sure a close adviser or a sympathetic political figure takes over.”

“It is a U.S. appointment that is not necessarily meritocratic,” one senior official from an international charity told The Guardian. “It is something that the Trump administration controls, and that has to be a source of concern.”

India Plans Another 500 Gigawatts of Renewable Capacity by 2028