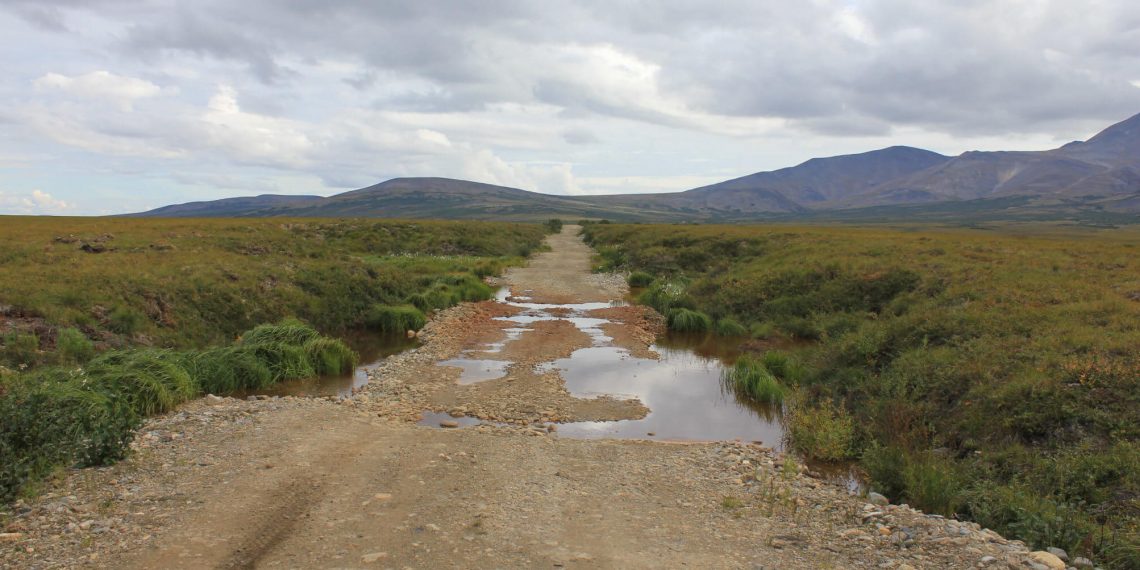 Permafrost thaw and retreating Arctic ice don’t just imperil caribou and bears. People, too, may find the ground shifts beneath their feet.

LONDON, 1 January, 2019 − In just one human generation, citizens of the far north could find themselves on shifting soils as the region’s permafrost thaws. Roads will slump. Buildings will buckle. Pipelines will become at risk of fracture. And in 2050, around three fourths of the people of the permafrost could watch their infrastructure collapse, as what was once hard frozen ground turns into mud.

All this could happen even if the world keeps the promise it made in Paris in 2015 and limits global average warming to just 1.5°C above the level for most of pre-industrial history.

In the last century, the world has already warmed by 1°C on average: the Arctic region has warmed at a far faster rate. At present rates of warming, driven by the profligate use of fossil fuels that raise the levels of greenhouse gases in the atmosphere, the world is on course for an average warming of 3°C by 2100.

Researchers from Finland, Norway, Russia and the US report in the journal Nature Communications that they mapped, on a scale of a kilometre, the buildings, installations, roads and other infrastructure of the permafrost world: a region defined as that where the ground is frozen solid, summer and winter, for at least two consecutive years.

More than 4 million people live in this pan-Arctic landscape: at least 3.6 million of them, and 70% of their transportation and industrial infrastructure, are at risk.

“These observations have led me to believe that global warming is not a ‘fake’ but the reality. And here, in Alaska, we are dealing already and will be dealing even more in the near future with this reality,” said Vladimir Romanovsky, of the University of Alaska’s geophysical institute, one of the authors.

Climate scientists and glaciologists have been warning about the rate of change in the Arctic for two decades: one estimate proposed that for every 1°C of warming, around 4 million square kilometres of permafrost − an area bigger than India − could thaw.

Locked in the frozen soil is an estimated 1,700 billion tonnes of carbon: this is about twice the mass of carbon in the atmosphere in the form of the greenhouse gas carbon dioxide. Its release could precipitate even more calamitous climate change. And the economic consequences – assessed at a potential cost of $43 trillion − could be ruinous.

The latest study found that climate change respected no borders: one third of all Arctic infrastructure and 45% of hydrocarbon extraction fields in the Russian Arctic were in high hazard regions: that is, once the soil thawed, the ground became unstable.

Around 470 kms of the Qinghai-Tibet Railway and 280 kms of the Obskaya-Bovanenkovo Railway, the most northerly in the world, lie across what could be thawing permafrost. The scientists identified more than 1,200 settlements in zones where the permafrost could thaw: around 40 of these had populations of 5,000 or more.

Pipelines, too, were endangered: 1,590 kms of the Eastern Siberia-Pacific Ocean oil pipeline, 1,260 kms of the gas pipelines in the Yamal-Nenets region − which supplies one-third of European Union imports − and 550 kms of the Trans-Alaska pipeline systems could be at “considerable risk”: that is, they were in areas where near-surface permafrost could thaw by 2050.

By then around one million people, 36,000 buildings, 13,000 kms of roads and 100 airports could have become high hazard environments. And with them, permafrost thaw could threaten to affect 45% of oil and gas fields in the Russian Arctic.

All forecasts arrive with considerable uncertainties, and the authors concede that they could be wrong. But, they warn, even if they are, their estimates of the infrastructure at risk would probably not be much smaller and could be substantially higher. Around 19 large settlements are in their highest hazard zone “but the number could be as large as 34,” they warn.

If nations acted on the Paris promises, they say, the levels of risk would start to stabilise after 2050. “In contrast, higher greenhouse gas levels would probably result in continued detrimental climate change impacts on the built environment and economic activity in the Arctic.” − Climate News Network