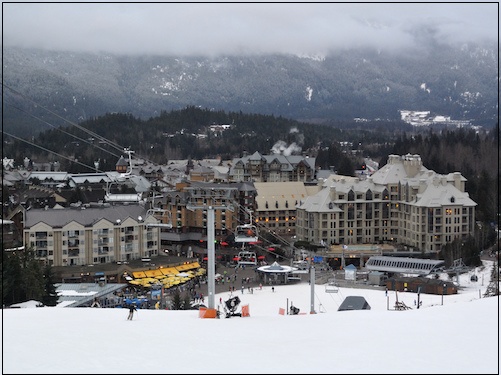 Several Alberta fossils are boycotting a CIBC investor conference in Whistler, British Columbia, and the bank is considering moving its annual event elsewhere, after Mayor Jack Crompton asked Canadian Natural Resources Ltd. to commit to pay for its “fair share of the costs of climate change being experienced” by the weather-dependent ski resort town.

“As a town with a population of less than 15,000 people, this is a significant cost to bear along with costs associated with impacts to winter and summer sports tourism,” Crompton wrote November 15.

“After the missive became public this week, a number of companies decided they would not participate in the investment conference,” CBC reports. “CIBC then told oilpatch clients Friday it wouldn’t make them choose between the conference and ‘doing what is right.’”

“Over the past days, we have been in dialogue with many of you regarding the letter recently sent by the Mayor of Whistler to one of your industry peers,” wrote Managing Director Roman Dubczak, the bank’s head of global investment banking. “In recognition of your collective and justified frustration, we do not want to put you in a position of choosing between our conference and doing what is right. We are therefore removing the oil and gas presentation stream from our conference agenda.”

He added that the bank would review “the longer-term location of our Western Canadian-based institutional investor conference,” more commonly known over the last 22 years as the Whistler Institutional Investor Conference.

In his letter to CNRL President Tim McKay, Crompton noted that “communities around the world are increasingly expecting you to take responsibility for your products,” and that taxpayers currently cover 100% of the costs associated with those products. In a Facebook video Thursday, Crompton expressed regret and acknowledged his community’s current dependence on fossil fuels. “Our intent was to join that call to action. Our aim was never to make anyone feel unwelcome in Whistler,” he said.

“We recognize that there are hundreds of thousands of Canadians who work directly and indirectly in the oil and gas sector and they are very proud of the work they do. We know that you are facing challenging times,” Crompton added. “As so many have said to me over the last couple of days, we are a user of Canada’s energy. Whistler acknowledges as a community that we depend on fossil fuels,” and “we have a responsibility to respond to the climate change challenge ourselves and do it locally.”

But by then, CNRL had withdrawn from the conference, along with Cenovus Energy, Gibson Energy, and PrairieSky Royalty. McKay claimed that “Canadian oil and natural gas is an important part of the solution to reducing global GHG emissions,” while the other fossils complained about what a Cenovus release called “non-stop unfounded attacks on our industry”.

“There’s not a lot we can do just from our own company’s perspective to try to educate Canadians, but one thing we can do is basically vote with our feet, so we’ve decided not to go to Whistler this year,” said PrairieSky Chief Operating Officer Cam Proctor.

In his letter, Crompton said climate modelling shows higher winter temperatures and more rain for his community, “and less snow on the lower half of the ski areas. Our modelling also shows that summer seasons are becoming longer, hotter, and drier, resulting in increased risk of forest fires.” The result: Whistler expects to have to invest an extra C$1.4 million per year in wildfire protection for at least the next 40 years.

Whistler’s climate accountability letter was part of a campaign initiated by West Coast Environmental Law, where staff lawyer Andrew Gage said the goal was to open a dialogue. “At the end of the day, I think it’s fiscally irresponsible if a municipality is incurring huge costs due to climate change and they’re not having this conversation, because otherwise they’re just passing those costs entirely on to taxpayers,” he told CBC.