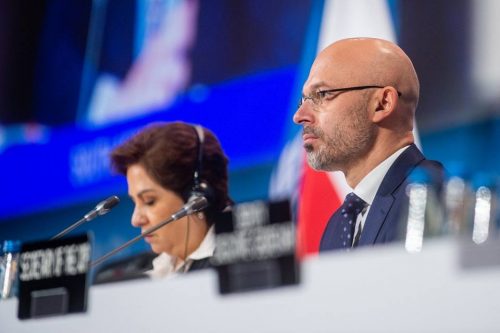 The High Ambition Coalition that drove the Paris Agreement to a better conclusion put in a repeat performance, and the Polish Presidency responsible for driving the success of this year’s negotiations earned a strong public rebuke, as this year’s United Nations climate conference went into overtime and scheduled extra negotiating sessions for Saturday.

COP 24 opened nearly two weeks ago with a sense of urgency to complete the technical rule book for implementing the 2015 Paris accord and setting the stage for countries to formally boost their Paris targets by 2020. With Poland largely failing to deliver the active leadership needed to push the rule book across the finish line, negotiations have been badly bogged down, and it’s fallen to other countries to prod each other into the stepped-up greenhouse gas reduction commitments that will be needed to keep average global warming to a maximum of 1.5°C.

“We’re running out of time,” United Nations Secretary General António Guterres told the conference Wednesday, in what The Guardian calls an “impassioned intervention” to rescue the negotiations. “To waste this opportunity would compromise our last best chance to stop runaway climate change. It would not only be immoral, it would be suicidal.”

COP 23 President and Fiji Prime Minister Frank Bainamarama told delegates they were at risk of going down in history as “the generation that blew it—that sacrificed the health of our world and ultimately betrayed humanity because we didn’t have the courage and foresight to go beyond our short-term individual concerns: craven, irresponsible, and selfish.” Former U.S. vice president Al Gore added that the conference faced “the single most important moral choice in history of humanity.”

On Thursday, Poland received the coveted Colossal Fossil award from Climate Action Network-International, reserved for the country or entity that does the most to obstruct progress at the annual UN climate gathering. Pacific Island states were awarded the much sunnier “Ray of the COP” for their determined efforts to push other countries for more ambitious climate goals.

With negotiations still under way, the return of the High Ambition Coalition is emerging as a high point of the talks so far. The upshot, The Guardian reports, is that “the EU and scores of developing countries have pledged to toughen their existing commitments to reduce greenhouse gas emissions to enable the world to stay within a 1.5°C rise in global warming.”

Canada committed to announcing a new target in 2020 just before the COP began.

“The spirit of Paris is back,” enthused Climate Action Network-Europe Director Wendel Trio. “The statement will boost greater ambition at the crunch time of these so far underwhelming talks. For the EU, this must mean a commitment to significantly increase its 2030 target by 2020, even beyond the 55% reduction some member states and the European parliament are calling for. We call upon the countries that have not signed the statement so far to stop ignoring the science.”

Jake Schmidt, international program director at the U.S. Natural Resources Defense Council, called the moment a “shot of energy” at a critical moment in negotiations. “We finally have a growing group of countries signaling that they want to leave here with a strong agreement that delivers on the promise of Paris,” he told CNN.

“America is in,” added EU climate commissioner Miguel Arias Cañete. “The federal government is on climate holidays. But in the United States, there is action. California. Governor Brown. The mayors of the important cities. The governors. There’s action. Civil society is alive in the United States.”

The Guardian also reported “strong progress” on the always-contentious issue of climate finance, with Germany and Norway doubling their pledges to help poorer countries reduce their greenhouse gas emissions and adapt to the impacts of climate change. And PS Mag reports on a “rare moment of unity” when delegates adopted measures to assist migrants driven from their homes by climate disasters.

“These are very general recommendations, and there should not be any agenda in adopting them,” says Md Nazrul Islam, director general of the Bangladesh Ministry of Foreign Affairs. “But developed countries think if you recognize the loss and damage issue, then you somehow have to pay compensation, so that’s why they’re not very interested in discussing this formally.”

“The recommendations ask countries to consider creating new laws and policies to deal with displacement, to enhance data collection and research on migration, and to consider the needs of migrants themselves—and of the communities where they end up,” PS Mag notes. “Crucially, countries also agreed to let the task force continue its work on displacement indefinitely, meaning that this conversation is unlikely to fade anytime soon. That’s important, given the urgency of the subject.”

“You can think it’s boring, that nothing is happening,” but “I’m convinced we’ve achieved something,” said Dina Ionesco of the International Organization for Migration. “Maybe with these recommendations, we’re on the way to removing political sensitivities and [creating] something more concrete.”

“Trump’s approach to migration has not polluted the conversation here,” added Harjeet Singh of ActionAid.

In the course of the COP, coal communities stressed that they can’t accept an unjust transition off fossil fuels, atmospheric carbon removal gained new momentum and credibility, the U.S. Environmental Defense Fund warned that a loophole in the Paris rule book could allow international airlines to greenwash their contributions their own carbon reduction deal, and the sport, tourism, and fashion industries were accused of greenwashing of their own.

Protesters disrupted the United States’ clean coal event in Katowice, Donald Trump’s climate advisory literally sprinted away from veteran Democracy Now! journalist Amy Goodman when she tried to question him about the administration’s climate denial, and U.S. mayors and governors spoke up for the rest of their country. “I think it’s important to show what civil society thinks,” said Rocky Mountain Institute analyst Carla Frisch. “It reminds them that the U.S. is serious about reducing emissions.”

Canada’s Environment Minister says there will be new CO2 strategies released following the 2020 election but does not acknowledge we are in a Climate Emergency.

Canada continues to provide C$3.3 billiion dollars a year to fossil fuel industry in subsididies and has spent C$4.5 billion on KM pipelimne and at the same time exempting tar sands oil production from any meaningful restrictions on CO2 emissions.

COP24 provided the basis of a CO2 emissions Rule Book but NOTHING as far as therequired significantly elevated CO2 emissions reduction targets OR the urgency of the CLIMATE EMERGENCY.