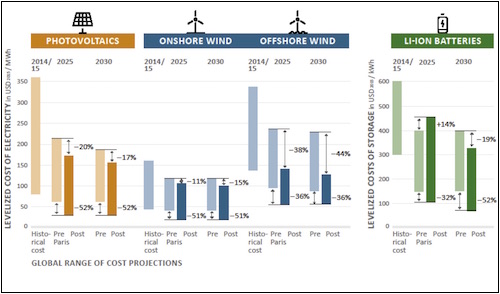 The falling cost of renewable electricity and lithium-ion batteries will make it “substantially cheaper” for countries to fulfill their carbon reduction commitments under the Paris Agreement, according to a discussion paper released last month by Umwelt Bundesamt, the German environment agency.

Compared to the costing available in 2015 when the Paris Agreement was negotiated, countries can look forward to savings of up to 52% for photovoltaic solar, 51% for onshore wind, 44% for offshore wind, and 52% for batteries by 2030, the paper states.

Germany’s calculations are based on the results of recent government or utility auctions seeking the lowest available prices for the renewable energy sources (RES) they wanted to procure. “Although there are caveats when interpreting auction results as being equivalent to future generation costs, worldwide auction outcomes serve as a strong indicator that the levelized costs of energy for RES technologies are decreasing faster than expected,” the paper states. “Photovoltaics and onshore wind power are even undercutting fossil power prices in some world regions. For batteries, the recent announcements of car manufacturers also suggest that recent cost projections are more in line with current expectations.”

One consequence of the precipitous price reductions “is that an increase of ambition of NDCs (the Nationally Determined Contributions at the heart of the Paris Agreement) is enabled,” Umwelt Bendesamt asserts. “In this new situation, the same investments that were foreseen for the NDCs now lead to higher outcomes and allow for higher targets.”

The agency concludes that current national commitments “may be based on outdated assumptions,” a reality that could be a “starting point for the revision of the NDCs” based on detailed technical and socio-economic analysis for each country.