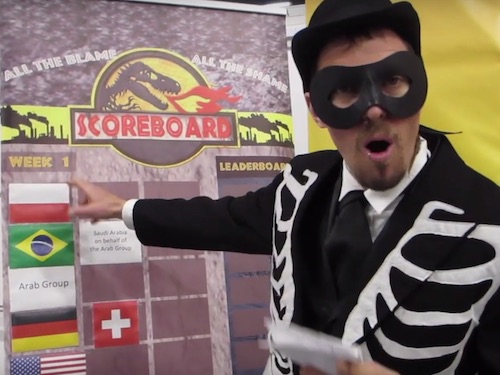 At each year’s United Nations climate change conference, Climate Action Network-International bestows its coveted Colossal Fossil award on the country or entity that did the most during the two weeks onsite to obstruct progress on climate change.

The Colossal Fossil at COP 24 was the conference host, Poland, with a brief swipe at the European Union for allowing one of the world’s most committed coal states to host a crucial, high-stakes negotiation. CAN-International also acknowledged Pacific Island states for their determined effort to push for faster action and higher ambition.

A Colossal Fossil for Poland

Throughout the two weeks of negotiations there has been one country that we keep coming back to. Yes, there have been many called out for blocking negotiations or not doing enough to support implementation at home, but one stands out above all else.

You see, the Polish Presidency has not created space for ambition here at COP 24, even with a complete understanding of what outcome is needed. We really should accept by now that they will avoid working on support packages and revision of NDCs [the Nationally Determined Contributions that embody countries’ Paris commitments]. However, the blame is not just on the Presidency, because the Polish government is making their job more difficult, it is the opposite of the support that should exist. It is difficult when the government and ministries are pushing the Presidency to consider the Polish agenda or the Presidency being understaffed, which is influencing the outcome of this COP.

So, what has the Polish Government been doing at COP? Well, the Polish government and ministers are promoting coal or so called “clean coal” during side events, not only in the COP at the Polish Pavilion, but also at other conferences. We did try to avoid this during meetings before the COP, where governmental officials were informed that such events would not be welcomed by the global community.

I’m sure you all remember last week, as well, when Polish President Andrzej Duda said Poland can use coal for the next 200 years, to which we responded by awarding them a Fossil.

Not bad enough for you? How about the Polish Minister of Energy, Krzysztof Tchórzewski, stating that the Ostrołęka C coal power plant, the construction of which was initiated one week after the announcement of the IPCC report, is uneconomic, but will be constructed anyway. What?!

But wait. Apparently, there are answers, as the Polish Minister of Environment said the decaying trees in the primeval forest of Białowieża are responsible for air pollution. Well, that’s solved. Our work here is done!

Unfortunately, there wasn’t much hope when the COP was being planned, either, as the Polish government chose several coal sector companies to partner with to sponsor COP 24. Among them we find the Polish Energy Group that is an owner of the biggest lignite power plant in Europe, Bełchatów, and one of the biggest polluters in Europe, as well as others—Tauron; JSW, and PGG, the largest coal extraction companies in the EU. Also, there is PGNiG, the national gas company, which was invited. There are no places at the table for green initiatives.

Last, a topic that deeply affected us all, when Polish authorities denied entry and/or deported at least 12 members of civil society groups due to attend the UN climate talks in Poland. The deportations follow the enactment of national legislation earlier this year by the Polish government in relation COP 24. Several UN human rights experts have publicly questioned the compatibility of the law with international human rights standards and expressed today their “dismay at the actions taken by the authorities to prevent free and unfettered public participation in these critical multilateral discussions”. What is more, over the last few days, we’ve witnessed Parties cutting out references to human rights across different parts of the Paris rule book.

Um, yeah, before we go, just a side note to the EU, this is a European COP. Why are you letting this happen? It’s hard to claim to lead when you are allowing one of your own to drag down the ambition.

‘Ray of the COP’ Honours for Pacific Island States

It’s the end of Week Two. We’re all a little tired, emotionally spent, and perhaps looking forward to a lovely break.

Therefore, at the end of a rather dismal COP in a rather dreary climate, it is high time we spread a bit of sunshine! Today, we choose to recognize the vulnerable countries at these negotiations with a Ray of the COP.

Despite facing existential threats from climate change, they are engaging patiently and in good faith, with those who choose to deny the science, deny their right to loss and damage finance, and deny previous hard-fought agreements, like the Paris Agreement.

The Pacific Island Developing States released a statement calling it like it is: COP 24 is a pivotal moment in human history.

The IPCC report has detailed the risk of the survival of island communities due to extreme weather and rising sea levels. The statement made clear the “absolute necessity” to include loss and damage (Article 8 of the Paris Agreement) in the Paris rulebook…

Specifically, we would like to recognize the Ministers of Vanuatu, the Cook Islands, Samoa, Tuvalu, Fiji, and the leaders of the Maldives and Tuvalu who have made such powerful statements in plenary that included:

“Whether you welcome, note, or ignore the science, this is catastrophic for humanity” —Vanuatu Foreign Minister, Ralph Regenvanu.

“The truth is we had no choice but to do our part.”—Prime Minister of the Cook Islands, Henry Poona.

“Our quest for solutions to address the most pressing and existential issue of our time—climate change—has never been more urgent.”—Prime Minister of Samoa, Tuilaepa Lupesoliai.

“It is very clear that climate change is the single greatest threat to humanity we face today.”—Prime Minister of Tuvalu, Enele Sopoaga.

Thank you for raising your voices in this time of great need. We can only hope that other countries will listen and take heed.