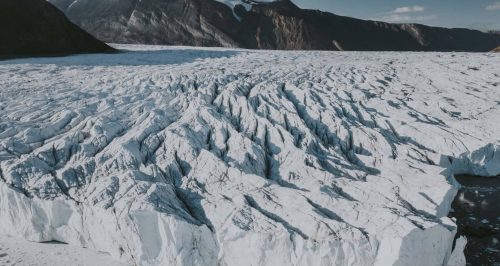 Recent melting of Greenland’s icecap has been more intense than ever. And all the signs are that it could get worse.

LONDON, 13 December, 2018 – Greenland’s icecap – the largest single store of frozen freshwater in the northern hemisphere – is melting faster than ever, according to two separate studies using two different approaches.

Surface meltwater started flowing over the surface and percolating through the ice at a greater rate in the mid-19th century and accelerated dramatically during the 20th and the first decades of the 21st century, according to a new study of ice cores taken more than 2,000 metres above sea level.

And a 25-year record of European Space Agency satellite data confirms the alarming picture: the elevation of the Greenland ice sheet was changing in the mid-1990s, and the pace of thinning stepped up after 2003. Greenland’s bedrock carries enough ice to raise global sea levels by around seven metres.

“Melting of the Greenland Ice Sheet has gone into overdrive. As a result, Greenland melt is adding to sea level more than at any time in the last three and a half centuries, if not thousands of years,” said Luke Trusel, a glaciologist at Rowan University in the US.

“And increasing melt began around the same time as we started altering the atmosphere in the mid 1800s.”

His co-author Sarah Das of the Woods Hole Oceanographic Institution said: “From a historical perspective, today’s melt rates are off the charts, and this study provides the evidence.”

Snow falls on the great icecaps of the two hemispheres, freezes, melts a little in the summer and freezes again, so that – like the rings of a tree – the accumulated precipitation tells a story of successive years of climate change. The two researchers and their colleagues report in Nature that ice cores taken from the icecap between 2003 and 2015 contained enough information for them to assess annual melting rates over several centuries.

They found a clear pattern of more intense melting nearer the present, and over the last 20 years the intensity increased by between 250% and 575%, compared to the 18th century. In the last century the entire planet has warmed by around 1°C as greenhouse gas levels in the atmosphere have risen, in response to ever greater use of fossil fuels.

The message for the future is ominous. “Rather than increasing steadily as climate warms, Greenland will melt increasingly more and more for every degree of warming,” said Dr Trusel. “The melting and sea level rise we’ve observed will already be dwarfed by what may be expected in the future as climate continues to warm.”

Greenland has served for decades as a climate laboratory: change almost imperceptible in lower latitudes can be measured almost on a yearly basis in the high fastnesses of the island, and the Nature study is only the latest twist in a story that is already alarming.

Scientists long ago took the measure of change on the ice cap, in the glaciers and at the boundary with the Atlantic, and identified the dangers of accelerated warming in the Arctic.

They monitored unexpected increases in the flow of the island’s biggest glaciers, monitored the way the island’s bedrock rose in response to an increased loss of ice, and even identified those reaches of ice that had passed the point of no return.

The Nature scientists backed up their on-the-ground observations with measurements made by satellites. And in an entirely separate study, European researchers report in the journal Earth and Planetary Science Letters that, according to their readings too, the elevation of the icecap had begun to change in ways that enabled them to measure ice loss with the decades, and a recent speed-up.

“A pattern of thinning appears to dominate a large fraction of the ice sheet margins at the beginning of the millennium, with individual outlet glaciers exhibiting large thinning rates,” said Louise Sandberg Sørenson, of the Danish National Space Institute, who led the research.

“Over the full 25-year period, the general picture shows much larger volume losses are experienced in west, northwest and southeast basins of Greenland, compared to the more steady-state situations in the colder north.” – Climate News Network