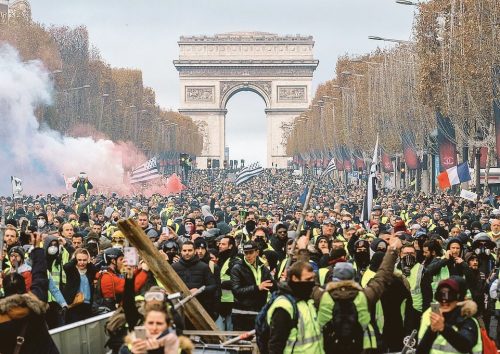 The massive Yellow Vest protests in France are emerging as the latest example of the public pushback that takes hold when one of the main pillars of climate action, a price on carbon pollution, begins hitting people in the pocketbook.

Hundreds have been arrested, and some analysts say President Emmanuel Macron’s hold on power may be in jeopardy, in protests that began with a focus on annual gas increases first introduced in 2014 as part of France’s response to climate change. The protests “have become the biggest obstacle yet to such attempts to encourage conservation and alternative energy use,” the New York Times reports. “The protests point to the difficulties facing nearly all industrialized countries committed to pulling the world back from the cliff’s edge of catastrophic climate change.”

The Times coverage opens on an interview with 32-year-old pastry maker Vincent Picard, who styles himself a “militant ecologist” but still joined the Yellow Vest protests. “He acknowledges that the tax might encourage the conservation considered critical for a healthy planet. But with the nearest train station 35 minutes away, he has to drive to work every day,” the Times states.

“I am conscious that we have reached the end of fossil fuels and that we have to modify our habits,” Picard explained. But “you have to continue to live.”

The Times says the question is not so much whether carbon pricing is an essential tool to combat climate change, but how to cushion its impact for the most vulnerable. “Many analysts say the French tax was not politically deft, falling hardest on people outside French cities who were already feeling the pain of stagnating incomes and who do not have the same mass transportation options as urban residents.”

And in the wake of the protests, “rather than spurring the effort to cut fossil fuel use, the misstep now threatens to set it back,” the paper adds. “It angered those who can least afford to pay more to get to work and drop off their children at school,” and “landed with a thud” during COP 24 in Katowice, Poland, forcing French Prime Minister Édouard Philippe to skip the conference “because of bubbling unrest at home.”

A major problem with France’s fuel tax is that less than one-quarter of the €34 billion the country expects to raise this year will help its poorest citizens shift to less carbon-intensive forms of transportation, said University of California at Berkeley energy policy specialist Daniel Kammen. Much more of the fund “could be used to lower the prices of electric vehicles, including taxis, to help make them more affordable for commuters in areas without public transportation,” the Times states, citing Kammen. “Or they could be used to develop more charging stations or subsidize big batteries to enable taxis to do long trips.”

Ultimately, “while President Macron has highlighted the need for funds to invest in clean energy, that is not actually what was planned,” he said.

“This situation illustrates how equity and fairness considerations have to be built into the design of such policies,” agreed Union of Concerned Scientists Policy Director Alden Meyer.

“Everybody loves to talk about climate goals and preserving the environment, but nobody is talking about the now,” said Harvard University researcher Vonda Brunsting, a specialist in environmentally responsible investment policy.

“Some governments are intent on having ambitious plans for meeting the Paris climate conference goals, but they have to survive politically long enough to put them in place,” she added. “Macron and the French government have skipped over the part involving the workers and the community.”