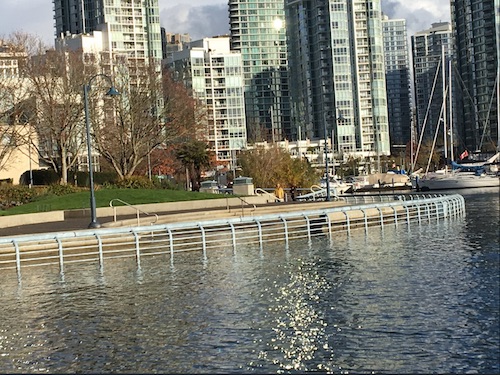 “It looks like this was probably designed for the high tide from maybe the ’70s or the ’80s,” Danyluk told CBC. But thanks to sea level rise, “today’s king tide event will be the high tide of 2050.”

CBC describes king tides as “predictable events” that happen about twice a year, driven by the position of both the moon and the sun. “In Vancouver, damage from king tides tends to be minimal. They happen relatively infrequently, and much of the infrastructure around the seawall, for example, is coated in paint that prevents corrosion.”

But they can do damage when they coincide with a storm surge and drive tide levels up by 30 to 100 centimetres, affecting human infrastructure and sensitive coastal ecosystems.

In a 2012 incident that was called a 50-year event, “we saw erosion at the Stanley Park seawall and also at Kitsilano near the pool,” Danyluk recalled. “It was in the tens of thousands of dollars that we saw in damage—and that’s the kind of damage we could expect in the future at king tide and one metre of sea level rise.”

She added that the city is now working on an updated climate strategy that will include a sharper focus on adapting to climate impacts. “Parts of our seawall might be a little higher,” she said. “We might have a more interesting shoreline where we’ve restored part of the intertidal zone to allow for the beach to grow, and we might have different tree species growing in our streets.”