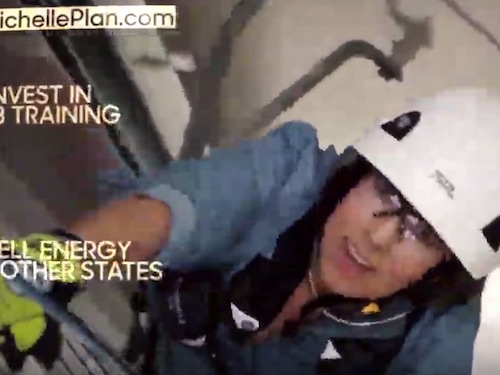 A U.S. congresswoman from New Mexico climbed a 265-foot wind turbine tower to her state governor’s mansion in mid-term elections earlier this month.

“You don’t see a lot of candidates for governor out here, much less one wanting to climb a 26-storey windmill,” says the voice-over that shows Rep. Michelle Lujan Grisham (D-NM) strapping on a safety harness before beginning her climb.

“But Michelle is no usual candidate. As governor, she’d require that New Mexico get to 50% clean and renewable power. She’d sell energy to other states to create jobs here. And she’ll invest in job training and apprenticeships to teach these skills to more workers.”

Lujan Grisham won her campaign November 6, making her one of several incoming Democratic governors now seen as a leading edge of the effort to drive renewable energy development in the United States.

“New Mexico should be leading on clean energy,” the campaign ad states. “Michelle’s got the guts to be a great governor.”