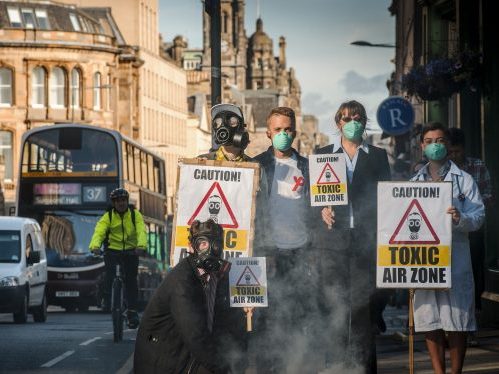 Friends of the Earth Scotland/Flickr

Chronic exposure to the air pollution associated with greenhouse gas emissions kills 2.1 million people world-wide and 7,142 in Canada per year, according to the second edition of an annual countdown on climate change and health produced by The Lancet, one of the world’s most prestigious medical journals.

That statistic, combined with the health impacts of heat waves, wildfires, flooding, and severe storms, makes a successful response to climate change the “single biggest thing governments can do to improve human health this century,” The Canadian Press reports.

The 7,142 Canadian deaths included 2,762 from non-coal industries, 1,282 in the farm sector, 1,063 due to land-based transportation, 345 due to coal-fired power plants, and 105 in coal-related industries, the Canadian Association of Physicians for the Environment (CAPE) reports.

“We’re not sure we can adapt to that in a way where we can maintain the same civilizational stability and health care systems we’re used to,” said Howard, who was co-author of the Canadian section of the report. “We’re talking about not just maintaining disease levels. We’re talking about our ability to provide health care.”

Based on data from 196 countries, the Lancet Countdown identified extreme heat as the most serious health concern, CAPE states, with the number of vulnerable people growing by 157 million between 2000 and 2017. “The researchers note that global temperatures have been increasing steadily since 1990, with the highest increases in Europe,” CAPE states. “Explaining that the hearts, kidneys, and livers of people cannot handle temperatures greater than 40°C, the researchers estimated that 153 billion hours of labour were lost to extreme heat in 2017,” 62 billion more than in 2000.

“The researchers also found increasing rates of insect- or animal-borne diseases in Africa, a downward trend in agricultural yields in 30 countries, and increasing economic losses due to extreme weather events,” CAPE adds. Around the world, 712 extreme weather events in 2017 produced US$326 billion in economic losses, a three-fold increase over 2016.

“A lack of progress in reducing emissions and building adaptive capacity threatens both human lives and the viability of national health systems they depend on, with the potential to disrupt core public health infrastructure and overwhelm health services,” the global report concludes.