SNAPSHOT: A Bumpy Road to Paris Implementation as Countries Prepared for COP 24 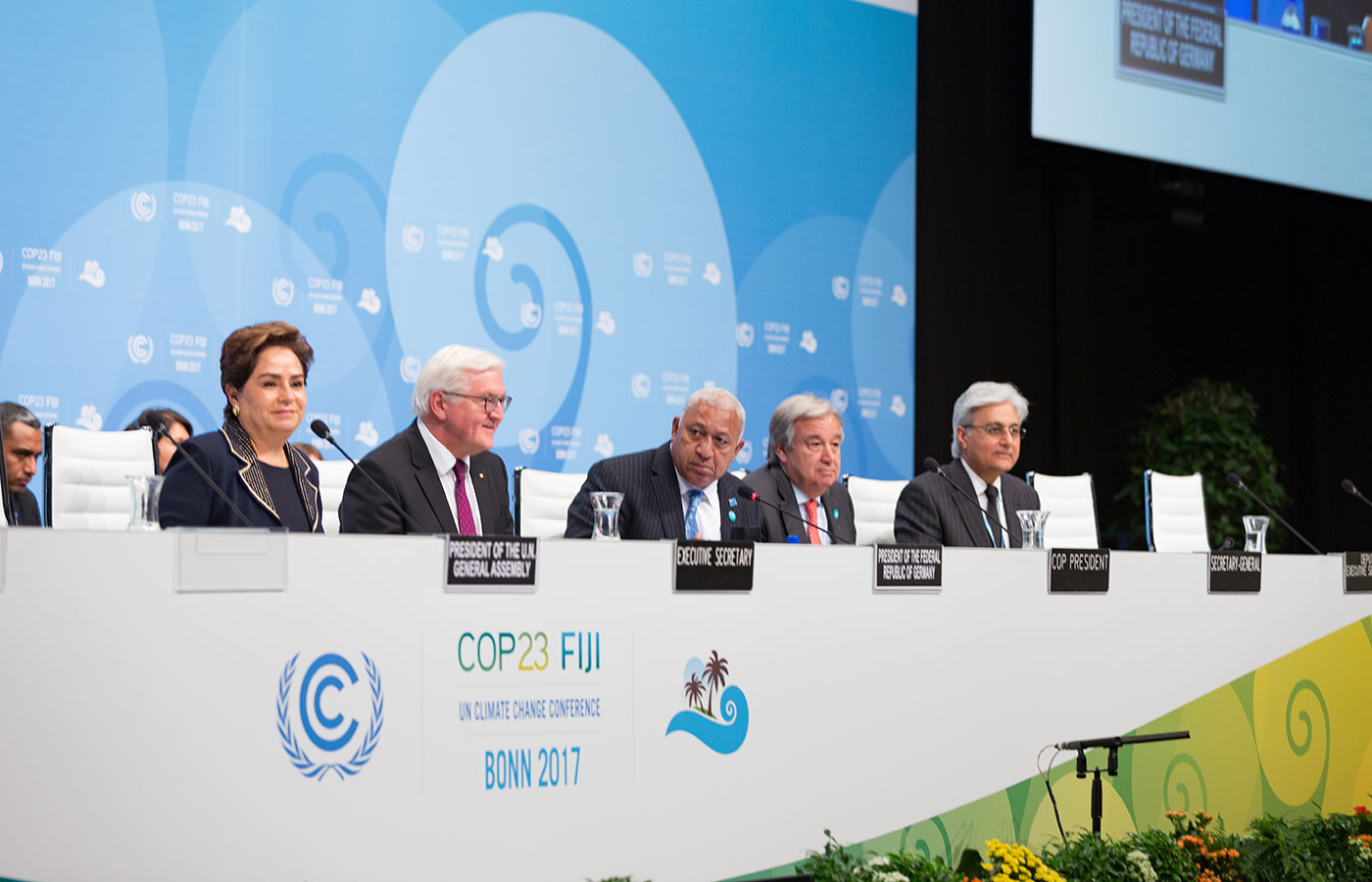 In the months leading up to this year’s United Nations climate conference in Katowice, Poland, negotiators worked toward completion of the all-important rulebook for implementing the 2015 Paris Agreement, and several individual countries announced faster, deeper targets for reducing their greenhouse gas emissions. But while the year saw progress, it still wasn’t nearly fast enough or ambitious enough to bring the worst effects of global climate change under control.

Stumbling Toward a Decision

The Intergovernmental Panel on Climate Change (IPCC)’s landmark report on pathways to climate stabilization was one of the top climate stories of the year, with its dual emphasis on the cataclysmic hazards of exceeding the 1.5°C “guardrail” for average global warming and the pathways for avoiding those outcomes. Early leaks of the report indicated the atmosphere was on track to exceed the 1.5°C threshold by 2040.

Ahead of the report’s release in early October, there were fears the IPCC would pull its punches in laying out the 1.5°C challenge, and epic climate laggards like Saudi Arabia did their best to make that fear a reality during final negotiations in Incheon, South Korea. In the end, science prevailed, said Climate Action Network-Canada Executive Director Catherine Abreu, who anchored the 40-member civil society delegation that helped wrangle a positive outcome from the negotiations. The final document combined urgency with hope and stressed that every additional 0.1°C of global warming is a choice between life and death, as IPCC delegates called for drastic cuts in coal production to protect the 1.5°C target. Climate Home News was out quickly with the 37 things you need to know about the IPCC report.

Before and after the IPCC meeting, there was no shortage of urgent calls for action, with UN Secretary General António Guterres pleading for a faster response to avert runaway climate change, ex-U.S. climate envoy Todd Stern urging countries not to backslide on Paris implementation, and UN climate secretary Patricia Espinosa declaring that countries will finish the Paris rulebook this year, with or without the participation of a climate-denying Trump administration in Washington.

But getting there was easier said than done. Mid-year negotiations in Bonn, Germany opened with calls for faster action and tougher carbon reduction targets, but ultimately bogged down so badly that countries agreed to a supplementary negotiating session in Bangkok in September. While they were in Bonn, most rich countries didn’t even bother showing up for a crucial dialogue session on how to compensate the world’s most vulnerable nations and regions for the impacts of a global crisis they had virtually no role in bringing about.

The Bangkok talks opened with Espinosa, Fiji Prime Minister Frank Bainimarama, former UN secretary-general Ban Ki-Moon, and key climate campaigners once again urging faster action on Paris implementation and climate finance, as the World Resources Institute (WRI) laid out three must-do challenges for climate negotiators to address. The meetings ended up stalemated on key issues, leaving WRI to issue yet another call for progress as delegates gathered for yet another pre-meeting in Krakow, Poland in late October.

Poland itself became a focal point for concern in the weeks and months leading up to COP 24, with the coal state’s far right government announcing ominous plans in late April to limit protests during the international conference and collect personal data on civil society delegates. The new security law received a harsh response from international human rights experts, but was still in effect as the conference dates approached.

Fossil Fuels or a Stable Climate: Pick One

Throughout the year, a steady stream of studies and reports pointed to the wide gap between countries’ response to the climate crisis and the greenhouse gas reductions required to hit the 2.0°C goal in the Paris Agreement, much less the 1.5°C threshold that gained clear recognition in 2018 as an essential target for climate stabilization.

In March, the International Energy Agency reported that global greenhouse gas emissions had increased 1.4% in 2017, after three years of stability. “The failure of emissions to rise between 2014 and 2016 had suggested to analysts that something may have finally changed in the global energy economy—a possible ‘decoupling’ of emissions growth from steady economic growth, thanks to the proliferation of renewables and increasing energy efficiency,” the Washington Post reported in late March. “Now, that hopeful assumption is being called into question,” and “the IEA’s findings will undoubtedly feed into an increasingly urgent international climate dialogue about how to strengthen countries’ promises under the Paris climate agreement.”

Countries and Investors Step Up

Amid the mounting urgency, there were signs of progress, both in theory and in practice. An in-depth analysis by the Global Commission on the Economy and Climate pointed to a US$26-trillion opportunity in the post-carbon transition, in a use-it-or-lose-it moment that could deliver 65 million low-carbon jobs, prevent 700,000 premature deaths, and generate $2.8 trillion in government revenues by 2030.

Big institutional investors pushed for more decisive action on climate during the annual G7 meeting in Malbaie, Quebec, just a week after the meeting’s host, Canadian Prime Minister Justin Trudeau, made the stunning decision to buy a tar sands/oil sands pipeline from Houston-based Kinder Morgan Inc. Renewable power generation posted record growth, and the International Renewable Energy Agency said renewables could hit the Paris targets with a six-fold increase that would also deliver massive cost savings. The world’s biggest petro-states faced pressure to diversify their economies and cut fossil subsidies, and one analyst proposed assigning each citizen of the world a 100-tonne lifetime limit on carbon emissions as a basis for a sustainable carbon budget.

Fifteen countries promised to strengthen their Paris commitments ahead of the 2020 target date for a new round of carbon reduction pledges. India looked likely to miss its 2025 target for installing a massive 175 gigawatts of renewable energy capacity, but was still achieving fast renewables growth and major cost reductions. China led the world in clean energy investment in 2017 and laid plans to boost its renewable energy target from 20 to 35% by 2030. Brazil’s new president had alarming plans to target the Amazon and the Indigenous communities that depend on it, eliminate his country’s environment ministry, and possibly withdraw from the Paris Agreement, after appointing a climate-denying anti-globalist with minimal diplomatic experience as foreign minister. Climate Home News reported that Amazon deforestation was already rising during the election campaign, in anticipation of Jair Bolsonaro’s win.

The news from China in 2018 pointed to continuing contradictions in the policies of a newly emergent superpower that had committed to lead on global climate strategy, faces its own domestic imperatives to do so, but is also caught in the throes of a complicated transition off fossil fuels.

With Donald Trump’s arrival in the White House, China had said it was ready to assume the sole mantle of global climate leadership in response to the United States’ “political selfishness” and capture the massive economic and geopolitical benefits of doing so. But the limits on that position soon came into focus, and they persisted into 2018.

Early in the year, observers were still discussing and dissecting President Xi Jinping’s stirring call in October 2017 for an “ecological civilization” that ensures “harmony between human and nature.” Xi’s speech to the Communist Party congress in Beijing envisioned a “legal and policy framework” that “facilitates green, low-carbon, and circular development,” promotes afforestation and wetland conservation and restoration, and takes “tough steps to stop and punish all activities” that damage the environment. “What we are doing today,” Xi concluded, is “to build an ecological civilization that will benefit generations to come.”

But by November 2018, with the effects of Trump’s trade war setting in, Greenpeace East Asia climate advisor Li Shuo saw China’s interest in climate leadership taking a back seat to more traditional strategic concerns. In a post for The Diplomat, he said the country’s wider concerns about the U.S. agenda were “shifting Beijing’s perception of the West as well as its own position in the world. Barely a year has passed since President Xi Jinping proudly declared his vision for China to be a ‘participant, contributor, and leader’ in global environmental affairs. Now, confidence is waning. With its rapid rise directly confronted by the most powerful nation in the world, the mood in Beijing is bleak.”

At least three news reports in four months had China leading the world in clean energy investment, and the country announced in late March that it had hit its 2020 emissions reduction target two years early. Later in the year, China laid out plans to increase its 2030 renewable energy target from 20% to at least 35% of electricity production, after scaling back renewables subsidies and introducing policies to enable solar and wind to compete at “grid price parity.”

But an investigative report also revealed that China was quietly restarting construction on 46.7 gigawatts of new coal capacity it had mothballed two years before—even though a glut of electricity was turning some of its existing plants into money-losing ventures—as bluer skies over Beijing translated into hardship for industrial workers. An emerging deal to fund a coal plant in Kenya became an embodiment of the contradiction in China’s climate leadership. There was speculation that Canada’s trading relationship with China might have been one factor in the Trudeau government’s decision to buy the Trans Mountain pipeline, and the prospect of an ice-free Arctic had China laying plans for a new polar silk road.

A mid-January report had the European Parliament falling short of its 2030 energy targets. But by May, the European Union was considering a net-zero emissions target for 2050, and in November the EU adopted an energy efficiency and renewable energy plan that was sufficient to overshoot its 2030 carbon goals. Ireland voted to divest from fossil fuels, and the UK’s renewable energy capacity exceeded that of its fossil fuel installations for the first time. Germany faced mounting pressure to phase out coal as a 2019 planning deadline approached, even as the country admitted it would miss its emissions reduction target for 2020. France announced a fossil production ban designed to keep five billion barrels of oil in the ground, and set a 2021 deadline for phasing out coal, while Finland unveiled a 2029 coal phaseout plan, with incentives for faster action. Iceland aimed for full carbon neutrality by 2040.

Massive loopholes in international trade regimes were keeping 25% of global greenhouse gas emissions outside national climate plans. France’s foreign minister told the U.S. there would be no trade deal between the two countries if the Trump administration withdrew from the Paris Agreement, President Emmanuel Macron urged the EU to take the same position, Sierra Club senior attorney Steve Herz agreed, and Trump’s withdrawal threat put a possible border adjustment tax back on the table. Canada and the EU added climate provisions to their Comprehensive Economic and Trade Agreement (CETA) in what was interpreted as a visible snub of Trump.