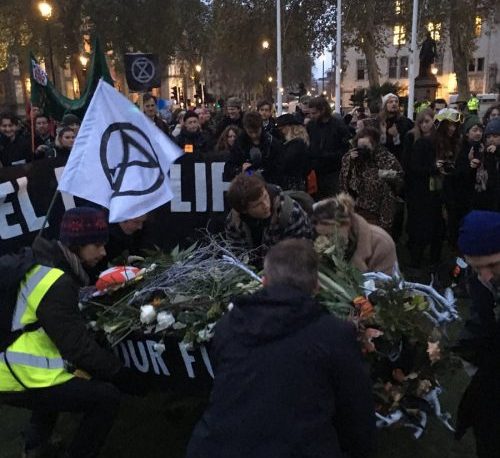 Just weeks after it began organizing and raising small donations in communities across England, Extinction Rebellion is spreading around the world, with activists from Ghana to the United States joining the call for drastic action to cut global greenhouse gas emissions to net zero by 2025.

The 6,000 people who blocked five Central London bridges just over a week ago, with some of them gluing themselves to government office buildings to protest the climate crisis, launched a movement “that calls for mass economic disruption using non-violent direct action and civil disobedience to halt the destruction of the planet and its wildlife and prevent catastrophic climate change,” DeSmog UK reports, in a dispatch republished by Resilience.org.

“Around the world, environmental campaign groups and activists watched the action unfold.” And “from the U.S. to Ghana and New Zealand to Western Europe, campaigners have shown enthusiastic support for Extinction Rebellion’s declaration of climate emergency.”

“What happened in London is a drop in a pond compared to what could happen worldwide in months to come,” said Robin Boardman, a Rebellion coordinator in the UK. “Like in the Arab Spring, Tunisia started the uprising, but it was not until it spread to Egypt that the whole movement gripped the Middle East.”

In the U.S., Climate Mobilization founder Margaret Klein Salamon is working on Extinction Rebellion’s international expansion, and sees the group as a game-changer for the wider climate movement “advocating solutions that may have long been seen as impossible, but which the group believe could gather mainstream momentum.”

Salamon “said Extinction Rebellion was born as the climate movement was shifting away from advocating gradual change to demanding immediate action in line with the scale of the climate crisis,” DeSmog writes. Now, her purpose is “ensuring it has a robust enough infrastructure and resources to give the movement the capacity and stamina to organize in the long-term.”

“There is so much momentum around Extinction Rebellion, and what is needed is to be able to escalate the disruption,” she said.: “This is still a very young movement, but there is tremendous enthusiasm for it.”

In a separate post for Resilience, former Greenpeace International CEO Paul Gilding cites five factors that could make the Extinction Rebellion different from the past 30 years of climate activism: the potential for large-scale, non-violent civil disobedience, the crystal clarity of the science declaring a climate emergency, the obvious viability of climate solutions that have been 25 years in development, the support the Rebellion can expect from various quarters—ranging from groups like Climate Mobilization, to newly-elected legislators like Alexandria Ocasio-Cortez (D-NY), and the reality that “nothing else we are doing is working.”

To date, “we are failing,” Gilding states. “We have built huge and widespread global support for action across policy-makers, business, and the public. Never has there been such engagement on the climate issue. But success cannot be defined as support for potential action. Success is slashing emissions. And on that, we are failing. There are countless good reasons and justifications for this—and it’s not like millions of us aren’t trying as hard as we can. But we are still failing. And time is up.”

The clarity and urgency of Extinction Rebellion’s message caught the eye of another leading voice for urgent action when UK journalist George Monbiot featured the group in a November 14 post for The Guardian.

“It was a moment of the kind that changes lives,” Monbiot wrote. “At a press conference held by Extinction Rebellion last week, two of us journalists pressed the activists on whether their aims were realistic. They have called, for example, for carbon emissions in the UK to be reduced to net zero by 2025. Wouldn’t it be better, we asked, to pursue some intermediate aims?”

In response, “a young woman called Lizia Woolf stepped forward. She hadn’t spoken before, and I hadn’t really noticed her, but the passion, grief, and fury of her response was utterly compelling. ‘What is it that you are asking me as a 20-year-old to face and to accept about my future and my life?…This is an emergency—we are facing extinction. When you ask questions like that, what is it you want me to feel?” We had no answer.”

Monbiot added that “softer aims might be politically realistic, but they are physically unrealistic. Only shifts commensurate with the scale of our existential crises have any prospect of averting them. Hopeless realism, tinkering at the edges of the problem, got us into this mess. It will not get us out.”