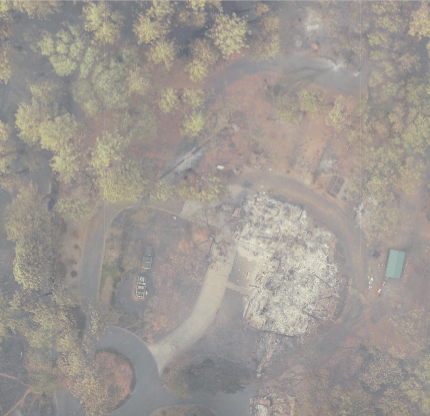 After 17 days, 85 dead, another 249 still missing, 14,000 homes destroyed, and flames that took out an area the size of Chicago, California fire officials declared yesterday that the Camp Fire, the deadliest in state history, has been contained.

“Three straight days of rain helped more than 1,000 firefighters get a foothold,” the Washington Post reports. “But the rejoicing was muted,” with authorities in Butte County north of Sacramento still expecting the death toll to rise. “Crews are still sifting through the ash of what used to be buildings, searching for human remains.” And “thousands of displaced people in shelters and hotels, or camping outdoors in freezing weather, face an uncertain future.

While crews worked to fix power lines and clear roadway debris, displaced residents were preparing to see their homes—or what’s left of them—for the first time in weeks. But even if they can get home, it may not be safe.

“Partially burned or hollowed-out trees are an ever-present threat,” the Post notes, citing coverage in the San Francisco Chronicle. “Debris and ash could be toxic, full of heavy metals or carcinogens. Just sleeping at a home surrounded by ash and debris could be hazardous.”

And Wildfire Today says it would be premature to consider the fire beaten once and for all. “In spite of rain and snow, trees, roots, and logs can continue burning for months; some may overwinter and continue to burn into the following spring,” writes editor Bill Gabbert. As well, “the rain has made it much more difficult to search through the ashes to find and recover bodies.”

Earlier last week, there was concern that the rains would “carry the potential for unleashing dangerous mudslides in newly-burned areas, while also making it more difficult for forensic teams sifting through cinders and debris in search of additional human remains,” CBC reported. “The elevated risk of mudslides could also increase the misery factor for evacuees, some of whom are living in tents or camping out of their cars. Residents who only recently were permitted back in homes that survived the fire may be ordered to evacuate again if they live downslope from badly burned areas.”

Last week, as well, the Post reported outbreaks of vomiting and diarrhea in at least one emergency shelter in Yuba City, with 120 evacuees showing norovirus symptoms, four in isolation, about one per day being transferred to hospital, and children hardest hit.

The “hectic evacuation” November 8 “left at least 52,000 people in hotels, relatives’ homes, parking lots, and makeshift shelters,” the paper stated. “More than 10 days later, those temporary accommodations are being overwhelmed by overcrowding and disease. As heavy rain moves into the area for the first time since the fire began, those living in tents face the threat of flooding, too.”

Earlier, severe air quality problems hit the area surrounding the nearly-obliterated town of Paradise, and spread south to the San Francisco Bay area. “In the communities closest to the Paradise fire, an apocalyptic fog cloaked the roads, evacuees wandered in white masks, and officials said respiratory hospitalizations had surged,” the New York Times reported. “Nearly 200 miles to the south, in San Francisco, the smoke was so thick that health warnings prompted widespread school closings. Even the city’s cable cars were yanked from the streets.”

“If this kind of air quality from wildfires doesn’t get people concerned,” said University of California at San Francisco pulmonologist Dr. John Balmes, “I don’t know what will.”

The Times post goes into some depth on the health effects of wildfire smoke and the long-term effects of inhaling ultra-small particulate matter.

The scope of the crisis didn’t stop Donald Trump from blaming California’s forest management practices for the fire, claiming that wildfires aren’t a problem in Finland because crews “spend a lot of time on raking and cleaning and doing things” to clear forest floors, and subsequently being mocked by confused Finns who pledged to “Make America Rake Again”. Trump Interior Secretary Ryan Zinke weighed in, as well, fantasizing that “environmental radicals” caused a fire driven by extreme wind, low humidity, and drought.

“I will lay this on the foot of those environmental radicals that have prevented us from managing the forests for years,” Zinke told Breitbart News, just minutes after asserting that it was no time for finger-pointing. “And you know what? This is on them.”

And meanwhile, Republicans in Congress were working to limit taxpayers’ ability to write off their losses from wildfires and other natural disasters. “The House tax bill would eliminate the deduction that allows victims of wildfires, floods, tornadoes, and earthquakes to claim uninsured losses,” Newsweek reports. “The Senate version of the bill allows the deduction only if the president officially declares a federal disaster. In 2015, Americans deducted $1.6 billion for uninsured losses in natural disasters, according to the Internal Revenue Service.”