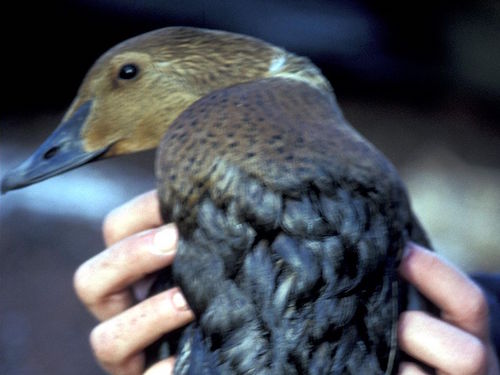 Newfoundland and Labrador has no hope of cleaning up from its worst-ever oil spill, after stormy waters off the east coast broke up at least two ocean oil sheens to the point that 250,000 litres of toxic material can no longer be recovered.

The spill “happened on Friday morning while Husky Energy’s SeaRose platform was preparing to restart production during a fierce storm that was, at the time, the most intense in the world,” The Canadian Press reports. By Monday and Tuesday, the oil was no longer visible on the ocean surface, and the Canada-Newfoundland and Labrador Offshore Petroleum Board (CNLOPB) had shifted its attention to monitoring wildlife and investigating the incident. Husky said it had found 15 oiled seabirds so far, but biologists were watching out for a much heavier toll.

Since offshore drilling companies are responsible for their own operational decision-making, CNLOPB CEO Scott Tessier’s statement on the case had the distinct sheen of an attempt to pass off accountability. “The facility and the responsibility is really theirs to shut down (in) a safe and controlled manner as conditions allow, so in this case it would’ve been the operator’s decision to attempt the restart,” the regulator said, although Tessier added that Husky’s past safety history will be factored into the ongoing investigation.

“Absolutely, any regulatory agency would look at the track record of a company in a case like this, and this will certainly be no exception,” he told CBC. “In this case, the volume of the discharge is significant, and the history of the company, and the fact that it did happen during a severe weather occurrence.”

But the Sierra Club Canada Foundation is already pointing to the spill as evidence that “this country is not prepared to handle a major oil spill and is lax in regulating its offshore industry,” iPolitics reports.

“Husky is reporting they are unable to confirm the extent of the spill, never mind try and clean it up—a virtually impossible task in seven-metre seas,” said National Program Director Gretchen Fitzgerald.

“Clearly, we are not learning from past mistakes,” she added. “This same operation had a near-miss with an iceberg last spring. One would have thought there would be extra vigilance, given this recent history. Instead, oil transfer from the rig was attempted one day after record-breaking waves shook the coast of Newfoundland.”

A spokesperson for Natural Resources Minister Amarjeet Sohi maintained that “Canada has a robust regulatory system for all offshore oil and gas activities that prioritizes safety, protection of the environment, and responsible management of our petroleum resources.” Fitzgerald countered that “our leaders are claiming this is world-class regulation. I think this spill shows we are far from that standard.”

While the documented wildlife impact has been relatively small so far, “experts on seabirds say an estimate on the number of birds killed from oiling could be months in the making, but is likely to grow,” potentially into the thousands, the Globe and Mail reports.

“The fact that they have found oiled birds means that there’s probably a lot more oiled birds out there,” said York University seabird biologist Gail Fraser, who noted that “millions” migrate to the region from the Arctic at this time of year.

“The conditions were terrible, and that makes it a challenge to get good estimates of how many seabirds might be killed,” she added. “It becomes kind of a hand-waving exercise and doing our best guess.”

“Imagine being on a roller-coaster in a blizzard and then trying to make a bird count,” he said. “I’m amazed they’ve seen any oiled birds.”

Citing Fraser, the Globe notes that “the region’s birds are particularly sensitive to oil pollution,” and “can die of hypothermia if even a small amount of oil slicks their plumage. They also have low reproduction rates and long lives, meaning a large hit to the population has a big impact.”

Jones noted that the problem is more complicated than simply washing an oiled bird, since even a “single drop” of oil is enough to “lethally damage” a dovekie.

“My guess is it means there’s a horrendous number of dead birds out there,” he told CBC. “They’ll die an agonizing death, even if they get exposed to a tiny amount of oil.”

But Jones predicted the storyline on the spill will be rather different. “It’s more of a public relations thing,” he said. “As soon as you get an oiled bird on camera being washed, everybody’s happy.”