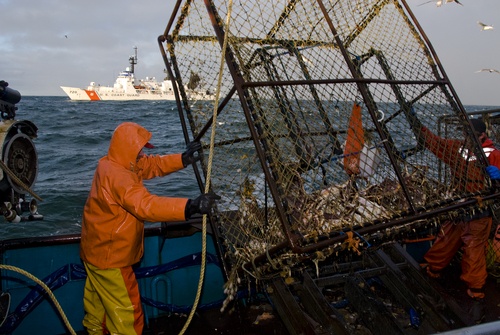 The biggest commercial fishing association on the U.S. west coast filed a lawsuit last week against 30 major fossil companies, including Calgary-based Encana Corporation, in a bid to hold them accountable for “significant economic losses” due to ocean warming off California and Oregon.

“We’re taking a stand for the captains and crew, their families, and the business owners that support the fleet,” said Noah Oppenheim, executive director of the Pacific Coast Federation of Fishermen’s Associations. “The fossil fuel companies named in our lawsuit knowingly caused harm, and they need to be held accountable.”

“We just about can’t make a living fishing crabs anymore,” said fourth-generation crab fisherman John Beardon, who has seen his earnings fall by half in recent years. “I’d like to see the industry that caused this take responsibility for that.”

“The association said the suit is a response to four consecutive years of the crab fishery being forced to close because of algae blooms, which are caused by warming oceans,” Climate Liability News reports. The crabbers “are seeking to hold fossil fuel companies accountable, arguing that the companies have long known that fossil fuel combustion would lead to warming of the oceans and atmosphere.”

Alongside Encana, the PCFFA is targeting colossal fossils like Chevron, ExxonMobil, and Royal Dutch Shell, invoking “claims of nuisance, negligence, product liability, and failure to warn” under California state law, CLN states. The association says the Dungeness crab industry employs thousands of people, on the boats and in coastal communities, and contributes hundreds of millions of dollars per year to the California and Oregon economies.

“The severe curtailment of the crab fishery, which is among the most productive, lucrative, and reliable fisheries on the West Coast, had damaging ripple effects throughout California’s and Oregon’s fishing families and communities, creating severe hardships that many fishermen and fishing businesses, including Plaintiff’s members, have struggled to overcome,” the PCFFA says in its complaint.

“Defendants have known for nearly 50 years that greenhouse gas pollution from their fossil fuel products has a significant impact on Earth’s climate, including a warming of the oceans,” the suit adds. Yet “defendants concealed the dangers, sought to undermine public support for greenhouse gas regulation, and engaged in massive campaigns to promote the ever-increasing use of their products at ever greater volumes.”

In addition to compensation, the suit demands that the fossils “pay for additional measures that will help mitigate future impacts,” Oppenheim said. “Those costs should not fall on the shoulders of hard-working fishermen.”

At least one legal observer said the crabbers have a promising case.

“I think the evidence that the crab industry is suffering serious economic harm as the result of rising ocean temperatures caused by greenhouse gas emissions is really powerful, and may be especially compelling to more conservative judges,” said environmental law professor Ann Carlson, co-director of UCLA’s Emmett Institute on Climate Change and the Environment. “The new lawsuit puts a human face on the consequences of climate change and makes those consequences less abstract than losses a government has or will experience. That isn’t to say that harms to municipalities and states aren’t real, with real human victims. But the new lawsuit personalizes the harms in a way that may be very persuasive to a court.”

“The dominoes keep falling. The collapse of Dungeness crab fishery along the California and Oregon coasts is yet another casualty of global warming caused by carbon pollution from oil companies that knew of the danger and acted with callous indifference to the consequences of their actions,” added Vermont Law School professor Patrick Parenteau.