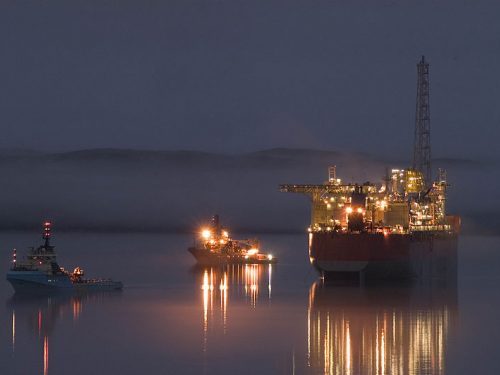 Oil and gas operations off Newfoundland and Labrador were shut down over the weekend after stormy weather made it impossible for Husky Energy to contain a 250,000-litre (1,575-barrel) crude oil spill, the worst in the region’s history, about 350 kilometres off the coast.

“The Canada-Newfoundland and Labrador Offshore Petroleum Board (CNLOPB) confirmed the province-wide shutdown Saturday,” CBC reports, after the leak from a flowline to the SeaRose floating production, storage and offloading (FPSO) vessel. “Due to ongoing high swells, the spill has not yet been contained. A Husky spokesperson could not confirm whether the line has stopped leaking.”

The reality of stormy weather making it impossible to contain a major spill is already sending shockwaves through pipeline and fossil tanker opponents on the British Columbia coast.

Petroleum Board spokesperson Lesley Rideout said the organization is working “around the clock” to ensure appropriate response to the spill, but that assurance appeared to apply to only one of the two issues of greatest concern. “There are significant precautions taken prior to a storm like this,” she said. “All workers are safe, which is our main priority.”

But marine wildlife expert Bill Montevecchi of Memorial University told CBC that tens of thousands of seabirds could also be at risk—and he took issue with calling the incident a spill.

“What we’re seeing is not an accident. It is the outcome of weak regulation,” he said. “The platform, which had shut down presumably because of stormy sea conditions on the Grand Bank, was then going back into operation at a time when clearly it should not have been doing that.”

Montevecchi likened regulation of coastal oil and gas operations to “playing Russian roulette, and the bullet just happened to be in the chamber on this one. That should not be an option.” He charged that the CNLOPB is “scandalously close” to industry, adding that “we need independent people out there. We’ve been asking for that for 25 years. You don’t ask a corporation that’s liable for oil spills to self-report what’s happening. A system like that is corrupted before it even starts.”

So far, Husky says it has spotted two oil sheens. One of them is “located approximately 50 kilometres south of the field. The Maersk Dispatcher is in the area for surveillance and wildlife monitoring. To date, there have been no reports of impacted wildlife,” company spokesperson Colleen McConnell told CBC. “Additional wildlife observers have been placed on vessels responding to the spill,” she added, and remotely-operated vehicles will begin conducting subsea inspections as soon as ocean swells are down to four metres.

Until then, responders are unable to confirm whether the flowline is still leaking, McConnell told CBC.

The storm that caused the SeaRose spill apparently led to a number of other near misses.

“On Thursday, smoke was reported on the Hebron platform and the crew ordered to muster. According to the board, the smoke came from a breaker fault from standby switchgear. No fire was detected,” writes regional reporter Malone Mullin. “Also on Thursday, a Panamanian bulk carrier called for Canadian Coast Guard assistance after it took on water and endured a power outage, but crew wrested control of the flooding and restored power late Thursday evening. Reports claiming crew had abandoned ship in lifeboats were unfounded.”

The SeaRose “was shut down earlier this year after the petroleum board found Husky violated operations protocols during a near miss with an iceberg in 2017,” CBC recalls. “In that incident, the vessel did not properly disconnect the lines which it uses to onboard oil as the iceberg approached.”

This time around, a reporter is already expressing concern about a limited flow of information from both the company and the regulator. “UPDATE: The largest oil spill in the history of the Newfoundland offshore happened on Friday, 250,000 litres. Many questions but both the offshore regulator @CNLOPB and @HuskyEnergy informed me will not be doing media interviews,” tweeted CBC’s Chris O’Neill-Yates.