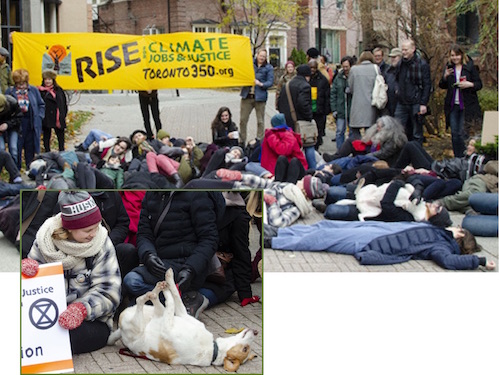 Nearly 100 people were arrested over the weekend in central London, UK, after an estimated 6,000 demonstrators occupied five bridges in what The Guardian calls “one of the biggest acts of peaceful civil disobedience in the UK in decades”.

The protest was organized by Extinction Rebellion, a new organization “which wants to force governments to treat the threats of climate breakdown and extinction as a crisis,” the paper states.

The group published three demands, calling on the UK government to “tell the truth about the climate and wider ecological emergency”, enact legally binding measures to bring carbon emissions to net zero by 2025, and convene a “national Citizen’s Assembly to oversee the changes, as part of creating a democracy fit for purpose”.

In London “protesters, including families and pensioners, began massing on five of London’s main bridges from 10 AM on Saturday,” the Guardian notes. “An hour later, all the crossings had been blocked.” At one time or another, the blockades hit the Southwark, Blackfriars, Waterloo, Westminster, and Lambeth bridges. Afterwards, protesters gathered in Parliament Square for a tree replanting ceremony and speeches, then ended the day with an interfaith service outside Westminster Abbey.

In Canada, 350 Toronto held a brief die-in in support of the UK protests. (Even Jasper the dog got into the act.)

The London protest culminated two weeks of activity in which more than 60 people have been arrested. “The social contract has been broken,” said Gail Bradbrook, one of the protest organizers. “It is therefore not only our right but our moral duty to bypass the government’s inaction and flagrant dereliction of duty and to rebel to defend life itself.”

“Given the scale of the ecological crisis we are facing this is the appropriate scale of expansion,” Bradbrook added. “Occupying the streets to bring about change as our ancestors have done before us. Only this kind of large-scale economic disruption can rapidly bring the government to the table to discuss our demands. We are prepared to risk it all for our futures.”

“I took the coach at 3 AM to make sure I didn’t miss it, and I’m so glad that I did,” said Alice, 19, who travelled from Bristol to participate in the Westminster Bridge blockade. “It’s a tiny personal inconvenience and, having made it, I get to be part of a rebellion. This moment will be remembered in the history books, when we finally stopped allowing our leaders to take us over the cliff.”

Green Party peer Jenny Jones expressed support for the demonstrators’ non-violent direct action. “We are at the point where if we don’t start acting, and acting fast, we are just going to wipe out our life support system,” she told The Guardian. “It’s fine to think we are a rich country, the sixth-biggest economy in the world, but actually we won’t do any better than anywhere else, because climate change will massively affect us too. Basically, conventional politics has failed us—it’s even failed me, and I’m part of the system—so people have no other choice.”

“What brought me here is the climate emergency, the extinction emergency, and my faith in God who created all this and whose creation we’re destroying and crucifying,” said Father Martin Newell at Blackfriars Bridge. “I’m called as a Christian to protect our neighbour who’s being abused.”

“It is not a step we take lightly,” said protester Tiana Jacout. “If things continue as is, we face an extinction greater than the one that killed the dinosaurs. I don’t know about you, but I’d rather be a worthy ancestor.”

Extinction Rebellion formed a couple of months ago and has raised about £50,000 in small donations, held local organizing meetings across England, and gained support from a group of 100 academics that included former archbishop of Canterbury Rowan Williams.

“While our academic perspectives and expertise may differ, we are united on this one point: We will not tolerate the failure of this or any other government to take robust and emergency action in respect of the worsening ecological crisis,” the group wrote in a letter to The Guardian. “The science is clear, the facts are incontrovertible, and it is unconscionable to us that our children and grandchildren should have to bear the terrifying brunt of an unprecedented disaster of our own making.”