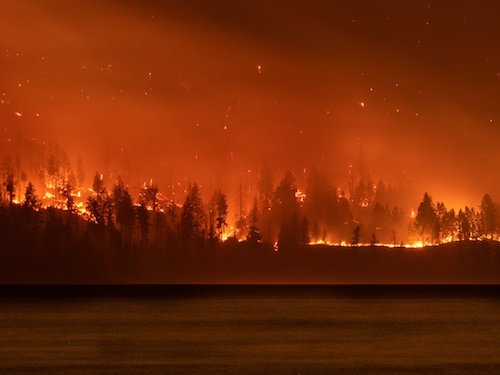 The British Columbia government has been going out of its way to eliminate a form of natural fire protection for its forests, using the herbicide glyphosate to exterminate broadleaf trees that could help control the epic wildfires that afflict the province every summer.

Last year, the province sprayed 12,812 hectares with the controversial chemical, essentially to preserve a mono-crop that is easier for the logging industry to harvest. Over the last three years, 42,531 hectares have been treated.

“The eradication of trees like aspen and birch on regenerating forest stands is meant to make room for more commercially valuable conifer species like pine and Douglas fir,” CBC explains. “But experts say it also removes one of the best natural defences we have against wildfire, at a time when our warming climate is helping make large, destructive fires more and more common.”

University of British Columbia forest ecologist Lori Daniels told CBC that aspen are sometimes referred to as “asbestos forests” among wildfire scientists, due to the “natural fuel breaks” that they and other broadleaf species form when their leaves are out.

“Aspen naturally thrives after a forest has been cleared by logging or wildfire,” CBC notes. “Their root systems can survive for thousands of years underground, and they’re capable of sprouting new clone trees as soon as there’s enough sunshine and moisture.” But glyphosate kills off the root system as well as the trees, so “when you spray a forest, that’s going to last for the lifetime of the forest,” Steidle said.

“A forests ministry spokesperson said the government recognizes that aspen and other deciduous trees can help reduce the wildfire threat to communities, and that in the future, more thought will be put into planting broadleaf trees near homes and businesses,” the national broadcaster reports. But “the rules about aspen in managed forest stands remain largely unchanged.” Those regulations say broadleaves can’t make up more than 5% of the trees in a forest block, or two hectares in total—whichever is smaller.

Daniels cast that policy as a major loss for the province after two years of record wildfires. “When fire is burning through needle leaf forest, it tends to be very vigorous and very fast-moving,” she told CBC. “When fire comes into a forest that has broadleaf trees in it, the conditions change so the fire behaviour is less vigorous and the rate of spread slows down.” That’s because aspen have higher water content than other species, and don’t generally contain the volatile compounds that make pine so combustible.

But instead, “we’re still stuck in the vortex where we’re trying to maximize timber production from conifers, and that is causing irreparable harm in our forests, given climate change and the types of changes in forests and insects and fire that we’re witnessing.”