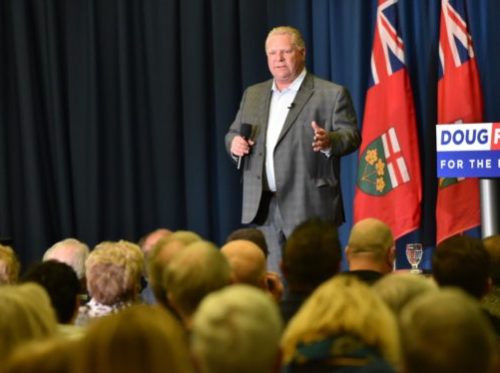 The Doug Ford government tabled legislation yesterday to eliminate the Office of the Environmental Commissioner (OEC), an independent watchdog accountable to the provincial legislature, as part of a fall fiscal update ironically titled “A Plan for the People”.

“By getting rid of the environmental commissioner…and the child advocate in Ontario, he is silencing accountability,” Liberal MPP Michael Coteau said of Finance Minister Vic Fedeli, who introduced the legislation. “This is truly illustrative of what this government stands for.”

Green Party Leader Mike Schreiner accused Ford of an “anti-environmental agenda,” adding that “they are undermining the checks and balances that exist in our democracy” by “moving the bureaucracy from one office to another office who’s going to be less critical of the government. This really isn’t a cost-saving measure.”

Commissioner Dianne Saxe has served as a reasoned, independent source of critical analysis on provincial policies ranging from climate change to species at risk, long-term energy planning to waste reduction, environmental rights to, most recently, toxic waste releases in Ontario’s lakes and rivers. Along with two other oversight bodies responsible for child advocacy and francophones, her office’s duties are to be reassigned to the provincial auditor general or ombudsman.

“Whether the commissioners still have jobs was unclear at the time of publication,” National Observer reports. The OEC said in a statement that it would consult with the speaker of the legislature to determine how its role might change under the new legislation.

“As we have for 24 years, we continue to champion Ontarians’ environmental rights and provide people with the information they need about government decisions that significantly affect the environment in their neighbourhoods and across the province,” a spokesperson said.

Much of the immediate coverage of Fedeli’s announcement focused on a fiscal statement that claimed a C$14.5-billion provincial deficit, down just $500 million after the Ford government announced $3.2 billion in spending cuts. Much of the difference is the $1.5 billion in revenue the Ford team lost when it cancelled the previous government’s carbon cap-and-trade program.

“Fedeli’s update also included a promise to relinquish Ontario’s jurisdiction over some major energy projects,” Observer notes. “The government said it wouldn’t block interprovincial pipelines linking Canadian oilpatch producers in Western Canada to the east. The update did not make any similar pledge to facilitate electrical energy transmission projects from Ontario’s neighbours,” even though imports of affordable surplus power from Quebec have been identified as one of the province’s most affordable electricity supply options.

Instead, Fedeli “laid out a commitment to work with the Ontario Energy Board to develop regulations for the expansion of natural gas distribution in over 70 communities in Ontario,” Observer states. “It will do so by ‘attracting private capital,’ according to the review, so that the program is not funded and managed by taxpayer funds.”

During the election campaign, Ford published no fiscal plan, but promised to find $6 billion in unspecified “efficiencies” if he formed a government. “So far, the main efficiencies identified by the Ford government are eliminating land lines in ministerial offices (saving $14,000 annually in Fedeli’s office), and going paperless (saving $26,000 at the Treasury Board secretariat),” CBC notes. “Added together, those savings total about 1/375,000th of the deficit.”